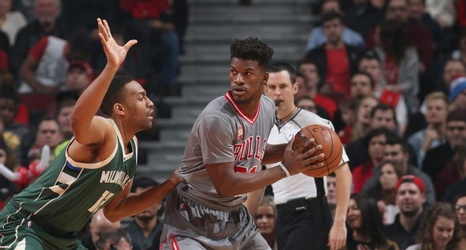 CHICAGO -- Chicago Bulls swingman Jimmy Butler is in the midst of his best stretch as a professional basketball player. Butler is averaging 21.8 points, 4.8 rebounds and 3.7 assists a game this season, but it's what he has done over his last two games that has caught the eye of the rest of the basketball world.

After scoring 40 of his 42 points in the second half of Sunday's win over the Toronto Raptors, besting a franchise record previously set by Michael Jordan for points in a half, Butler followed that up by scoring 32 points and tying a career high with 10 assists in a 117-106 win over the Milwaukee Bucks on Tuesday night.