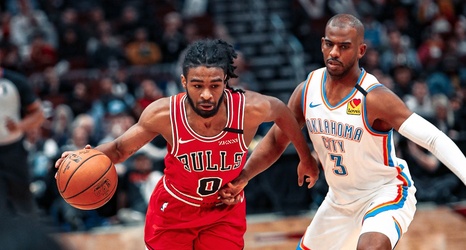 Coby White continued his hot streak scoring a career-high 35 points while Zach LaVine also erupted with 41 points but were unable to hold off Oklahoma City, losing 124-122.

The NBA didn't think Coby White was one of the 10 best rookies in the first part of the NBA season, the effective rating for the rookies who were selected for the All-Star weekend Rising Stars game. No, I'm not letting this one go easily. Coby White, who Tuesday had his second career high game in less than a week, may be the league's best rookie since then.

The Bulls Tuesday lost a thriller, 124-122 to the Oklahoma City Thunder, after coming back from a 24-point first half deficit to exchange leads 13 times in the fourth quarter with five ties before the Thunder escaped a late tag team scoring barrage from Zach LaVine with 41 points and White with 35.