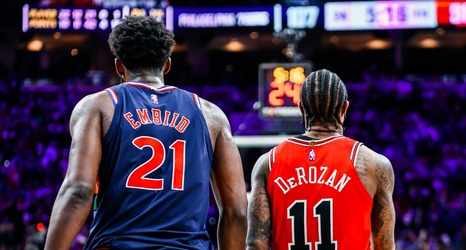 The loss is Chicago's fifth in a row, will look to bounce back in Detroit on Wednesday.

It wasn't all bad for the Bulls Monday.

Nobody got eaten by a shark, Joey Chestnut was not catering the team meal, everyone read their Tweets before hitting send, no one could hear Adele on the headphones, and the team was fourth in the Eastern Conference still sitting on a first-round playoff home court.

And the Bulls were getting to leave Philadelphia.

Unfortunately, that was with a season-worst fifth consecutive loss, 121-106 to the 76ers and Joel Embiid's 43 points, 14 rebounds and three blocks.