Bulls outmatched in Milwaukee, fall to 2-4 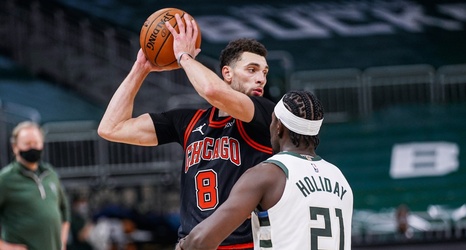 The Bucks shot hit 22 three-pointers on 45 attempts as they gave the Bulls a 126-96 defeat in Milwaukee. Zach LaVine led the Bulls with 16 points.

It difficult to play the defending two-time MVP in the third game in four nights as the Bulls painfully learned Friday in Milwaukee in a 126-96 defeat.

It's also difficult without four regulars in Covid protocol with Chandler Hutchison testing positive for the virus.

It's even more difficult when there was a mouse in the locker room and he apparently ate the game plan and the Bulls appeared confused on the way to 21 turnovers for 24 Bucks points.