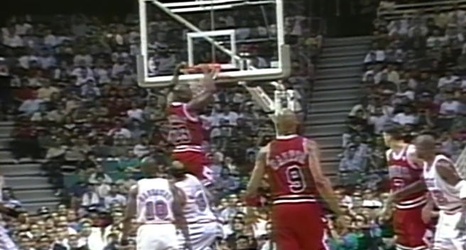 The 90s Bulls don't lose games in the first round. Observations from a win that capped a convincing series sweep of the Miami Heat.

Much was made of Michael Jordan tweaking his back in the first half of Game 2 throughout this one. When Jordan wasn’t dicing the Heat up for 26 points and three resounding 3-pointers, the camera often fixated on him getting treated on the sideline, and even grimacing in pain from the bench on occasion.

It was a game he needed a lift and Scottie Pippen provided it, notching the 17th triple double of his career with 22 points, 18 rebounds, 10 assists and three blocks.