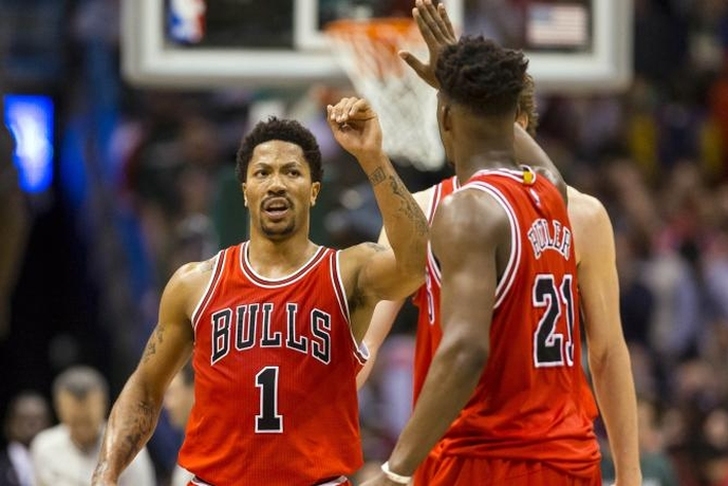 The Chicago Bulls were able to stop their freefall down the Eastern Conference standings this past week, picking up several much needed wins to keep them from falling out of the playoff picture. They are currently tied with the Detroit Pistons for the eighth and final playoff spot, and are a half game behind the Indiana Pacers for the No. 7 seed. Let's get you up to speed with the week that was and the week ahead with our Bulls Weekly update:

Last Week:
Chicago started the week with a huge 109-107 win on the road against the Toronto Raptors thanks to 29 points from Doug McDermott, keeping them from falling to .500 on the season. However, a equally disappointing 117-96 loss to John Wall (who had a triple-double) and the Washington Wizards on Wednesday dropped them to 33-33 on the year.

The Bulls returned home the following day to take on the Brooklyn Nets in the second game of a back to back, a game Chicago won 118-102. That high level of play continued on Saturday when they knocked off the Utah Jazz 92-85.

What's Next?
The Bulls start the week at home again on Monday, taking on the Sacramento Kings. They have a back-to-back home-and-home series with the New York Knicks on Wednesday and Thursday before facing the Orlando Magic on Saturday. For more on the Bulls' upcoming games, download the Chat Sports Android and iPhone app.

Injuries:
Guard E'Twaun Moore will miss a week with a hamstring injury.

Center Pau Gasol has missed the last two games with a knee injury and is listed as "day to day" moving forward.

What They're Saying About The Bulls:
Chicago Bulls Following Taj Gibson's Lead Down the Stretch
Bulls find their rhythm in win over Jazz
Bulls' consistency, Derrick Rose leads to win over surging Jazz