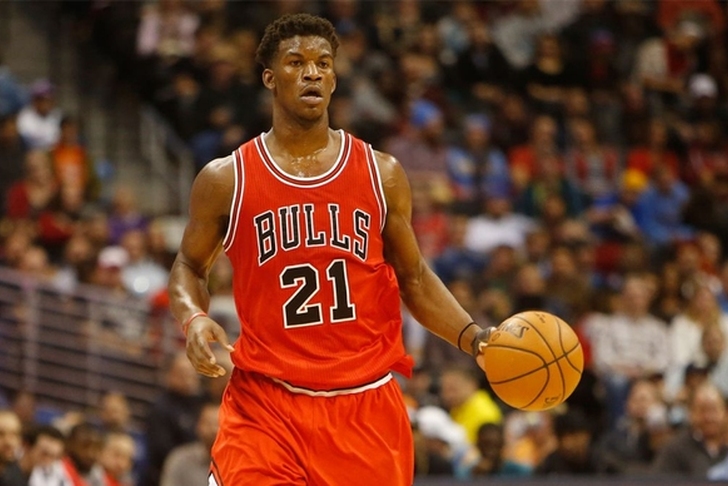 The Chicago Bulls hold the No. 14 overall pick in the NBA Draft, and have already pulled off the biggest trade of the offseason by shipping Derrick Rose to the Knicks. With the NBA Draft just a a few hours away the rumor mill is cranking at full speed, and several of those rumors focus on the Bulls. Here are the latest Bulls rumors you need to know.

Chicago To Trade Jimmy Butler Too?
With the trade of Rose, the Bulls might be entering a rebuilding process. That's especially true if they end up dealing Jimmy Butler to a team like the Orlando Magic.

Hearing that Chicago is entertaining this among other offers. Butler is available. Bulls are starting over https://t.co/74pgXNDXBs

The Bulls have previously rebuffed offers from the Celtics for Butler, so it remains to be seen if they're actually going to trade away Butler. Entertaining offers is one thing, accepting them is another.

Bulls Want Denzel Valentine?
The Bulls have the No. 14 overall pick this year, and it's still unclear who they are targeting. ESPN Insider Chad Ford has one name in mind.

"However, on Wednesday night, sources said the Bulls are getting comfortable enough with Valentine that they may take him instead,' Ford wrote. "Malik Beasley, Malachi Richardson and Furkan Korkmaz are also in the mix."

With the NBA Draft just a few hours away, we'll know soon who the Bulls end up taking. Ford also mentioned Wade Baldwin, and the common theme is that the Bulls are likely to take a guard in the first round.