The Chicago Bulls and Nik Stauskas: A Perfect Fit on Draft Night 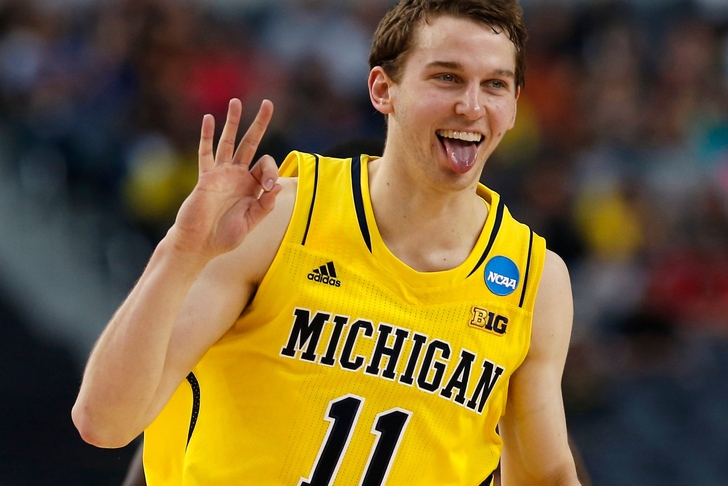 With the draft coming up this Thursday, it's time to take the first step in turning Chicago back into a championship contender. Currently,  the Bulls have the 16th and the 19th picks in this year’s draft. With these two picks, it’s nearly impossible to predict which players will still be available on draft day. Trading for a proven NBA player is way more of a certainty, and the Bulls have been prominent in recent trade rumors.

The Bulls have been mentioned in a rumored trade that would send the Orlando Magic the Bulls’ two first-rounders in exchange for SG Arron Afflalo. Afflalo would give the Bulls the perimeter scorer they’ve been badly lacking, but at $7.5 million a year, acquiring him makes the Carmelo Anthony signing essentially impossible.

I don’t know about you, but I’m not giving up on the Melo dream just yet. However, I do believe the Bulls need to trade both of their first round picks, packaging them to move up to the 76ers' 10th spot so they can grab Michigan guard Nik Stauskas. Recently, Stauskas has been flying up draft boards, and Chad Ford, ESPN’s NBA Insider, has Stauskas going at #10 to the Sixers in his latest mock draft.

This transaction allows the Bulls to move up high enough to safely select Stauskas. Also, by giving up two picks for one, the Bulls save roughly $740,000, according to the 2014 NBA rookie pay scale. It is crucial that the Bulls save as much money as possible, and allocate those savings toward the Melo fund.

It's no secret that the 76ers are building a team for the future. This trade gives them three first-round picks, with eight total in the 2014 draft...which should give them plenty of young assets to build around.

The 2014 Big Ten Player of the year averaged 17.5 PPG, 2.9 REB, 3.3 AST, and nailed 44% of his shots from behind the arc during his sophomore campaign. When Michigan made their championship run in the 2013 season, I always assumed Stauskas was just another undersized SG who could knock down the open three.

At 6’6 and 207 pounds, Stauskas is by no means undersized for an NBA shooting guard. As a sophomore, Stauskas carried Michigan to the Final Four, showing his exceptional shooting, surprising athleticism, and the ability to create shots off the dribble for himself and others.

What Stauskas would bring to the Bulls is a perimeter scorer that can come off the bench and light it up. Scouts say he is hands down the best 3-point shooter in this year’s draft class, and that would fill a huge void in Chicago. Stauskas makes hitting the 3-ball look easier than pressing and releasing the X button in NBA 2K14.

Yeah, no big deal. I’m just going to knock down 46 in a row in my backyard while freezing rain pours down on my hands – yawn. Seriously though, I almost was getting bored halfway through the video...like it was no longer impressive anymore, like he was some sort of artificial intelligence.

I just picture a 7-year-old Stauskas out on the court, crying his eyes out at midnight, and his dad being yelling, “You’re not goin’ back into that house until you make 50 shots in a row, we’ll be out here all night, I don’t care.”... and now the NBA is about to let this guy rip threes in a dry stadium without a waterlogged ball? That’s absolutely terrifying.

Well, it’s pretty evident that Stauskas can shoot the lights out. Is that all there is to his game, though? Some people think he’s just the next Kyle Korver or Jason Kapono, that all he can do is sit in the baseline corner and hit open shots. Between his film this season and his impressive combine numbers, though, Stauskas has proven that he’s more than just a pure shooter.

The next Kyle Korver, huh? He looks like he could be in the dunk contest, for crying out loud. I truly believe that Stauskas has all the tools to be a deadly scorer in the NBA. Put him around players like Derrick Rose, Joakim Noah, and hopefully Carmelo Anthony, the Bulls could be really scary.

On another note, what do think Stauskas’ neighbors are thinking?  They probably peep their eyes through the blinds and see an automatic 3-point machine one day, then a between the legs throwdown the next.

My only concern on bringing Stauskas to Chicago is that he's going to steal all our girlfriends. He’s young, he’s talented, and he apparently pulls girls like this… exactly what Chicago needs.