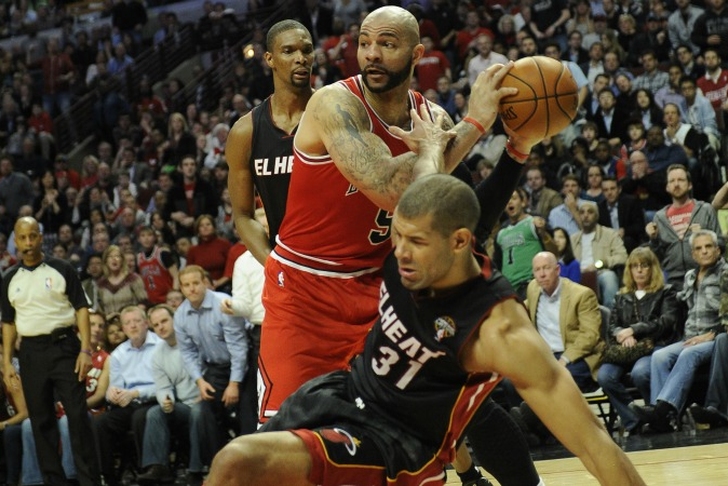 In a breaking Bulls rumors and news update, it appears that Carlos Boozer's time in the Windy City has come to an end with reports indicating that Boozer and his representation have been informed that he will be amnestied by the team.

Here's Joe Cowley of the Chicago Sun-Times with the scoop:

There haven’t been any takers on a sign-and-trade for Boozer, and the Bulls also want the money to go in a different direction, whether Carmelo Anthony is in the mix or not.

Under the amnesty provision, Boozer still will be paid the $16.8 million he’s due next season, but it won’t count against the salary cap.

Rather than using Boozer's large expiring contract as a trade chip, the Bulls seem intent on just gathering all the cap space they can now in order to make a full-out run at top-level free agents such as Melo, LeBron James, and Pau Gasol.

The 32-year-old Boozer averaged 13.7 points and 8.3 rebounds in his fourth and final season with Chicago - marking his worst totals in both categories since his rookie season with Cleveland in 2002-03.

If Boozer is amnestied, NBA teams will have a chance to bid on Boozer in a waiver process - with the highest bidder gaining his services and paying a portion of his salary. If not, he would then become a free agent.