Getting To Know Iowa State Coach Fred Hoiberg, The Bulls' Potential Next Coach 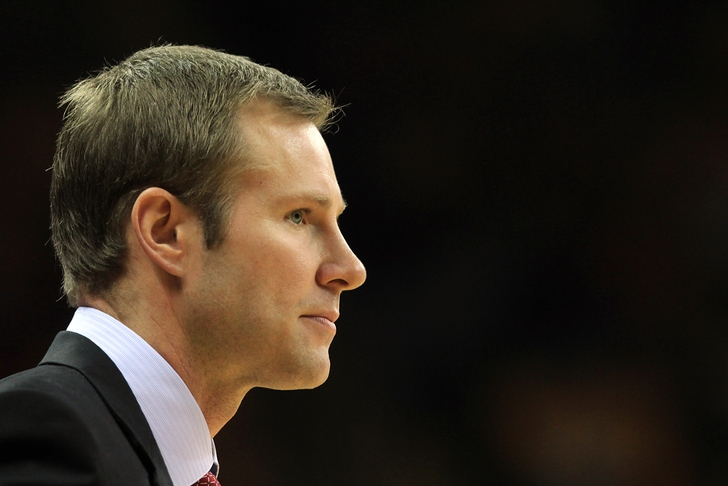 In the wake of the Chicago Bulls' six-game exit from the Eastern Conference Semifinals, all eyes are on coach Tom Thibodeau and his tenuous relationship with the team's front office. According to a bevy of reports, the arrangement is no longer workable and it's a matter of time before the parties split up, likely via a trade.

If so, Yahoo! Sports' Adrian Wojnarowski reports that Iowa State head coach Fred Hoiberg is the only candidate for the job with no other competition on the horizon.

"The job will be Fred Hoiberg’s if he wants it,” Wojnarowski said, via CBS Chicago. “There’s not going to be any competition for him. Now, it’s conceivable that Fred Hoiberg decides to stay at Iowa State, but if they make a change and Tom Thibodeau is out, Fred Hoiberg is really the only candidate for this job from the Bulls perspective. But that doesn’t guarantee that he’s going to do it. I know he’s already had to give it thought because it’s real.

“He knows what’s coming. Everybody does.”

Hoiberg has a close friendship with Bulls general manager Gar Forman. Forman worked as an assistant on Iowa State's staff when Hoiberg played for the Cyclones back in the mid-1990s.

“They have history, and they have a relationship,” Wojnarowski said. “They have a trust there, and I think that’s what they’re looking for here, from the Bulls’ perspective.”

Following his playing days at ISU, the Ames, Iowa native was selected 52nd overall by the Indiana Pacers in the 1995 NBA Draft. He served as a role player for three franchises over the course of ten NBA seasons, including a four-season stint with the Chicago Bulls from 1998-2003.

The Bulls gave Hoiberg the most playing time of his decade-long career, including his banner 2000-01 season where he averaged 9.1 points, 4.2 rebounds, and 3.6 assists in a personal-best 30.4 minutes per game. He capped off his playing career with the Minnesota Timberwolves, leading the NBA in 3-point shooting (48.3%) in his 2004-05 swansong.

Following the season, Hoiberg underwent surgery in June 2005 to correct an enlarged aortic root. The operation was successful, but following a brief comeback attempt as a player, Hoiberg joined the Minnesota Timberwolves coaching staff. On April 17, 2006, Hoiberg officially announced his retirement from basketball to take a job in Minnesota's front office.

Four years later, Hoiberg took over for Greg McDermott at Iowa State, who left Ames to take over the head-coaching reins at Creighton. Just one season into the job (2011-12), Hoiberg led the Cyclones to a 23-11 record first NCAA Tournament appearance since 2005. He has taken ISU to four-straight NCAA Tourneys all together, including a Sweet Sixteen berth in 2014.

Hoiberg became the fastest coach in Iowa State history to notch 100 wins (in just 148 games) on New Year's Eve of 2014, when Iowa State took down Mississippi Valley State in Hilton Coliseum. He is currently entering year three of a 10-year contract extension worth $20 million, complete with a minimal $500,000 buyout clause if he leaves to become an NBA coach or general manager.

The Chicago Bulls appear to be set to pay that, provided they can come to terms on a mutually-beneficial parting of ways with Tom Thibodeau.

“If you’re the Bulls, you want to get out of this A) without having to pay him or pay as low as possible and you’d like to be able to get a draft pick from a team," Wojarowski explains. "I don’t know that Orlando is going to give up one. They’re not going to give up that first-round lottery (pick). That’s not happening.

“Maybe a second-round picks is conceivable. The Clippers gave up a first-round pick for Doc Rivers, but they were contenders with a late pick. Orlando’s a lottery team. They’re not giving up a lottery pick for him. I’m sure the Bulls will ask for it."