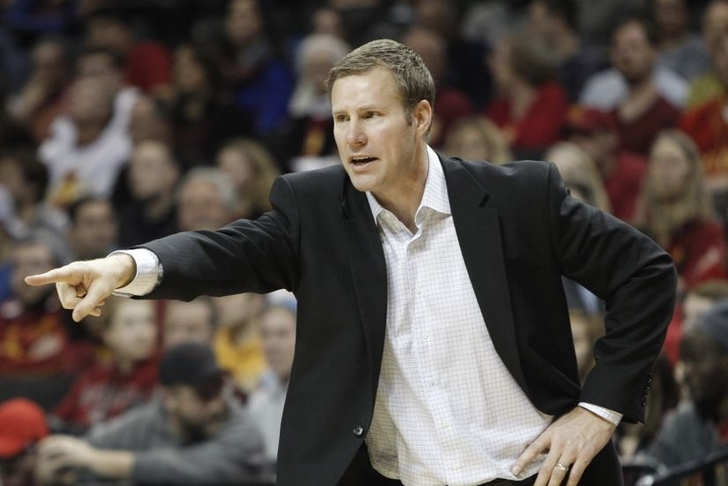 The Chicago Bulls are expected to get rid of head coach Tom Thibodeau, either via a trade or by firing him, had have targeted current Iowa State head coach Fred Hoiberg as the man they want to replace him.

According to Bear Heiser of Fox Sports West, a source told him that Hoiberg would take the head coaching job if it's offered to him.

Hoiberg is under contract with the Cyclones through 2023 and Iowa State Athletic Director Jamie Pollard has said he wants to be certain that he’s done everything possible to make him feel wanted at the school, but that may not be enough to keep Hoiberg from bolting to the NBA.

Hoiberg was a star basketball player at ISU, and the Ames, Iowa native was selected 52nd overall by the Indiana Pacers in the 1995 NBA Draft. He served as a role player for three franchises over the course of ten NBA seasons, including a four-season stint with the Chicago Bulls from 1998-2003.

The Bulls gave Hoiberg the most playing time of his decade-long career, including his banner 2000-01 season where he averaged 9.1 points, 4.2 rebounds, and 3.6 assists in a personal-best 30.4 minutes per game. He capped off his playing career with the Minnesota Timberwolves, leading the NBA in 3-point shooting (48.3%) in his 2004-05 swansong.

Following the season, Hoiberg underwent surgery in June 2005 to correct an enlarged aortic root. The operation was successful, but following a brief comeback attempt as a player, Hoiberg joined the Minnesota Timberwolves coaching staff. On April 17, 2006, Hoiberg officially announced his retirement from basketball to take a job in Minnesota’s front office.

Four years later, Hoiberg took over for Greg McDermott at Iowa State, who left Ames to take over the head-coaching reins at Creighton. Just one season into the job (2011-12), Hoiberg led the Cyclones to a 23-11 record first NCAA Tournament appearance since 2005. He has taken ISU to four-straight NCAA Tourneys all together, including a Sweet Sixteen berth in 2014.

Follow our Chicago Bulls team page for all the latest Bulls coaching rumors!