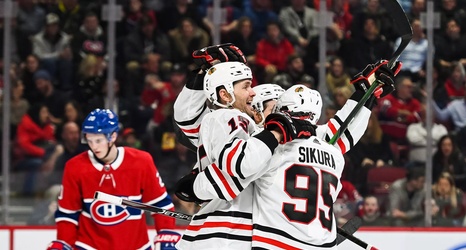 Zack Smith scored two first-period goals to help the Blackhawks win their third straight, 4-1 against the Canadiens on Wednesday at Bell Centre in Montreal.

Drake Caggiula had a goal and an assist, causing a turnover from goaltender Charlie Lindgren that led to Smith’s shorthanded goal and scoring a goal of his own in the third.

The Blackhawks finally got a hot start to the game, as, although the Blackhawks took a penalty (Kirby Dach for holding) about a minute into their first power play, Caggiula wrenched the puck away from Lindgren and got the puck to Smith.