Which Blackhawks prospects stood out during the Tom Kurvers Showcase? 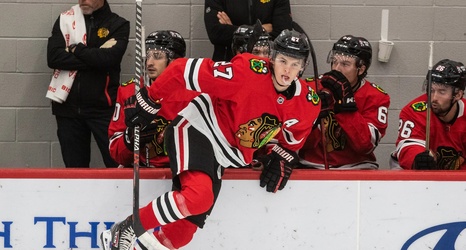 This weekend, several Chicago Blackhawks prospects played in the 2022 Tom Kurvers Prospect Showcase at Fifth Third Arena, which culminated with two games against players from the Minnesota Wild organization.

Here’s a summary of the action:

Colton Dach opened the scoring to put the Blackhawks up 1-0 just 23 seconds in the first game Friday night. He blocked a Wild defenseman’s shot then beat Jesper Wallstedt with a sharp-angle wrister.

Cole Guttman made it 2-0 Blackhawks a couple of minutes into the second when Josiah Slavin slid the puck to a net-crashing Guttman.