Stop Being Sad and Be Awesome Instead: Blackhawks 2, Hurricanes 1 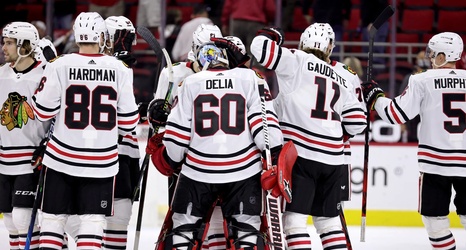 Despite not making the playoffs, the Blackhawks preached closing out the season positively, and they took steps towards that goal, ending their losing streak at six games with a late, come-from-behind 2-1 win over the Hurricanes Thursday night in Carolina.

The Hurricanes opened the scoring 9:49 into the first period. On the power play, Duncan Keith had the misfortune of being accidentally kneed in the face by an official, allowing Martin Necas plenty of space for a shorthanded breakaway and beat Colin Delia with a nifty move.

Here is a closer look at Keith running into the official with his face.