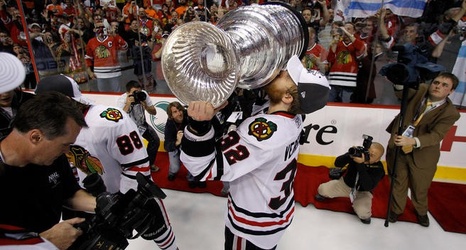 A valuable contributor to two Stanley Cups and an aspiring rapper Chicago didn't know it had, Kris Versteeg was a special breed.

Before he spit verses and busted rhymes of his own at the Blackhawks 2010 Stanley Cup championship rally u2060— and sang Macklemore's "And we danced" at the 2015 celebration with Joakim Nordstrom u2060— the speedy winger had 44 points (20 goals, 24 assists) during the 2009-10 regular season. He tagged on an impressive 14 points (six goals, eight assists) to help the Hawks hoist the Cup in 2010.

Versteeg also had strong numbers the prior year with 53 points; 22 goals, 31 assists, the latter of which lead all rookies, in the regular season.