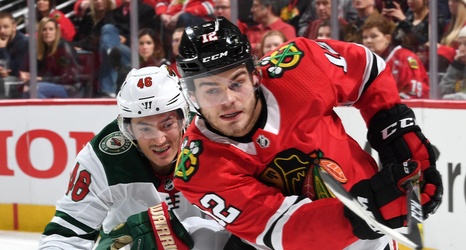 The Chicago Blackhawks are back at the United Center on Saturday night to face the Minnesota Wild for their final game of the preseason.

The Blackhawks are rolling out what is close to its final lineup against the Wild. The only players of note missing are Alex Nylander — seemingly bound for waivers — and Adam Gaudette, who is still in contention for a final roster spot.

With injuries to Wyatt Kalynuk and Caleb Jones, Ian Mitchell is getting a chance in the top-six. Jakub Galvas is also still with the Blackhawks and has received rave reviews throughout camp by coach Jeremy Colliton, so it’s likely he and Mitchell will be rotating in that last spot until the other two heal.