Chicago Blackhawks: Playing With a Purpose 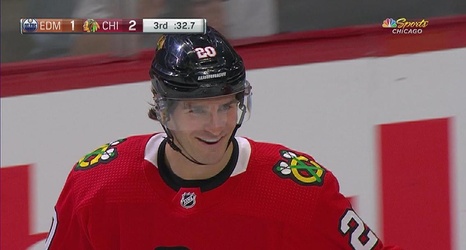 Entertaining, exhilarating, aggressive, chippy and even a bit nerve-wracking. All adjectives that describe the action that took place on the United Center ice Monday night between the Hawks and the Edmonton Oilers.

While the end result had Chicago handing Edmonton their first loss of the year, the most important thing is how they accomplished the feat. It makes you regain faith in the squad.

One of the stats that catches the eye is hits. The Chicago Blackhawks out-hit the Oilers 36-31. While there were quite a few examples throughout the contest, the hit Andrew Shaw laid on Joel Persson stands out as exhibit A as to why GM Stan Bowman, who has a penchant for reacquiring players, traded for Shaw this offseason: