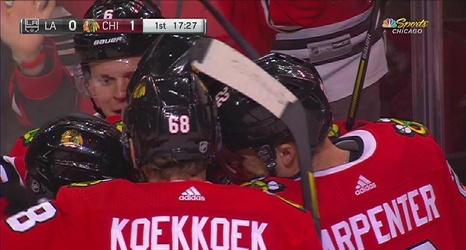 Line combinations don’t matter except for when they do.

After separating Alex DeBrincat and Dylan Strome for a few games, Blackhawks coach Jeremy Colliton paired them together on the “fourth line” with center Ryan Carpenter. The move paid off as DeBrincat and Strome combined for three goals in a 5-1 win over the Kings on Sunday at the United Center.

DeBrincat scored and assisted on both of Strome’s goal. Slater Koekkoek had two assists and Robin Lehner stopped 38 of 39 shots for the Blackhawks (3-5-2), who snapped a four-game skid.