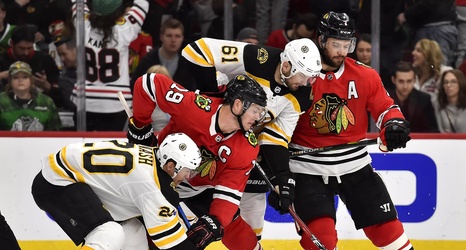 The Blackhawks welcome the Bruins to the United Center in Chicago’s second home preseason game.

During the past two days, Chicago has trimmed down their training camp roster by sending netminder Alexis Gravel back to the Halifax Mooseheads in the QMJHL and assigning a group of nine players, including Kris Versteeg, to the AHL. With a trip to Europe on the itinerary next weekend, head coach Jeremy Colliton is preparing for more roster cuts after Saturday’s game against the Bruins:

Colliton said to expect more cuts soon because they want to get down to one practice group by Monday.