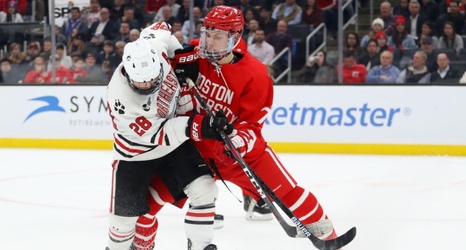 BOSTON, MASSACHUSETTS - FEBRUARY 10: Alex Vlasic #7 of the Boston University Terriers anbd Zach Solow #28 of the Northeastern Huskies battle for the puck during the second period of the 2020 Beanpot Tournament Championship game between the Northeastern Huskies and the Boston University Terriers at TD Garden on February 10, 2020 in Boston, Massachusetts. (Photo by Maddie Meyer/Getty Images)

Alex Vlasic is only 19 years old, and yet for the Chicago Blackhawks, he might be the team’s next shut down defender that they can put out on the ice in any situation.

Alex Vlasic still has a few seasons before he is going to jump to the NHL.