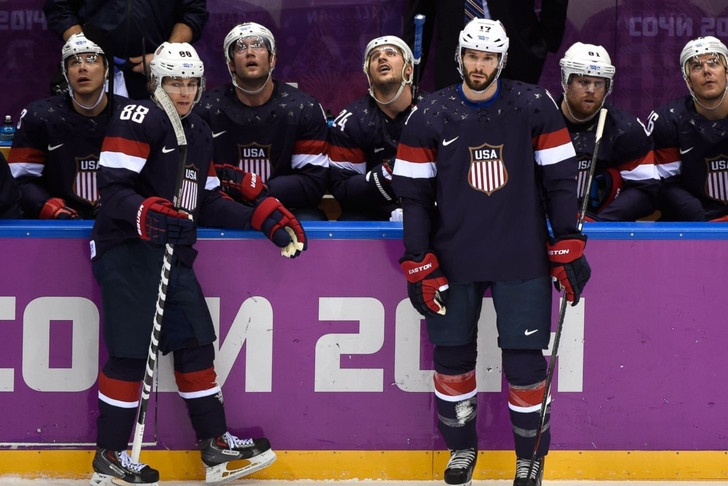 It’s been roughly two weeks since the LA Kings ripped out the heart of every Blackhawks fan in America (mine included). I would love to say I’ve moved on, or that I’ve already got my sights set on another cup run next season...but that just isn't the case.

That Game overtime 7 loss felt like my wife (that I don’t have) cheated on me with my best friend. It was like re-living Ned Stark (Game of Thrones spoiler alert) getting his head chopped off, like watching Mike Winchell come up a yard short, or witnessing Radio’s reaction when he finds out his mom passed. It was sheer heartbreak.

Enough of the sob story, though, its time to move on, Chicago. The first step in moving forward is coming to terms with the fact that the current roster just isn’t going to cut it anymore. Obviously, this off-season’s top priority is getting Jonathan Toews and Patrick Kane to sign huge contract extensions, but a major trade also needs to be in the cards. That trade needs to be for Vancouver Canucks center Ryan Kesler.

Kesler has made it widely known to his agent and to Canucks management that he wants out of Vancouver – can’t say I blame him. He has also said that Chicago is one of his preferred destinations if a deal gets done. Kesler isn’t going to come cheap, but adding him makes the Blackhawks favorites to bring the cup back to its rightful home.

It’s been a problem for years now, and it won't just magically go away. Over the past few seasons, the Hawks have tried hard to solidify a 2nd line center, but haven't found a permanent solution. If I ever have to watch another second of “stone mitts” Michal Handzus playing alongside Kaner, my head might explode.

Yes, the Kane – Shaw – Saad line had a lot of success against the Kings, but substituting Kesler for Shaw is an undeniable upgrade. In fact, you can confidently argue that a line of Kane – Kesler – Saad would be the best 2nd in hockey. It doesn't hurt that all three are Americans, not something you see often anymore.

Kane and Kesler also aren’t strangers when it comes to playing together. The two were teammates in the 2010 Vancouver Olympics, and were even line-mates in Sochi this year, so the chemistry is already there. If Kesler comes to Chicago, we can finally put the 2nd line center discussion to rest.

Kesler adds some much-needed toughness to the roster

Around the league, the Blackhawks aren’t well known for their physicality or checking. Luckily, they're among the best in terms of stick skill and skating, hence, two Stanley Cups in five seasons. This postseason run showed us that it’s time to toughen this team up.

We don’t need another guy like John Scott, getting five minutes of ice time per game strictly to beat someone senseless. We don’t need another goon like Daniel Carcillo, who might actually go Gilmore one of these days and stab someone with his skate. What we need is a hard-nosed, two-way center - someone who can produce points while making a physical impact.

During the 2011 postseason, San Jose’s Joe Thornton was relentless all series about trying to get under Kesler’s skin. I loved what Kesler had to say about the battle during a post-game interview:

Basically just telling one of the badder dudes in the league, “Hey, I’m trying to win a playoff series here, but if you still want to throw down, you can get at me next year.”

By the way, if you’re sick and tired of watching Dustin Brown screening Corey Crawford, scoring rebound goals, and running over Hawks like a Mack Truck, it looks like Kesler would take care of it.

What’s it going to cost to acquire Kesler?

This isn't easy to predict. How much are the Canucks going to ask for? What are the Hawks willing to give up? Would either team be willing to make this kind of trade with a rival?

Sources have continued to claim that the Canucks are maintaining a high asking price for Kesler. The Canucks would probably ask for the Hawks' top prospect, Teuvo Teravainen, rated the 13th best prospect in hockey (via hockeyfuture.com).

In my opinion, Teravainen is untouchable. He showed some struggles in his brief stint with the Blackhawks last season, but those nerves will dissipate as he matures and becomes more comfortable. His ceiling is just too high to move him at this point.

With Toews and Kane to see formidable contract raises, the Hawks are going to have to free up some space to take on Kesler’s $5 million per year contract.

Here is my hypothetical trade proposal:

With the extension that Bickell received last year, the Hawks would be able to take on Kesler’s contract if the two were swapped. Ryan Hartman was the Blackhawks' first-round pick in 2013, and is a highly rated prospect within the organization. Giving the Canucks another first round pick in this year’s draft should be enough to make this a valuable transaction for both sides.

Bottom line: Ryan Kesler finally addresses the 2nd line center void while also adding some much-needed grit to the Blackhawks' roster. The 29-year-old has never won a Stanley Cup, and he could be exactly the spark that ignites this team to be champions once again.