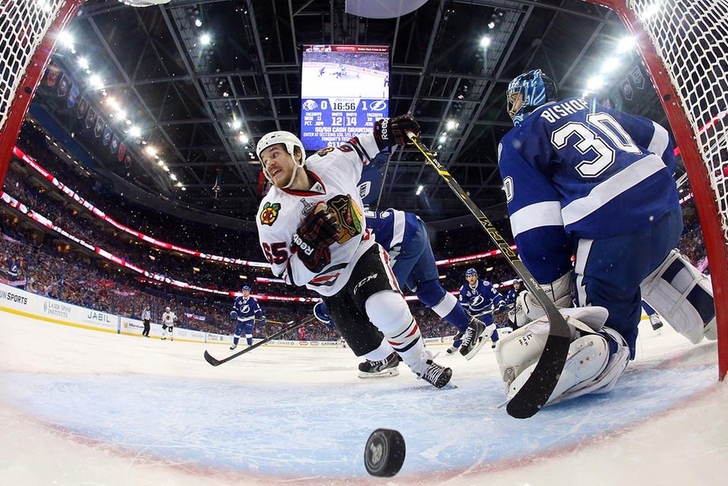 Game 3 of the Stanley Cup Final was Tampa Bay Lightning goalie Ben Bishop's major coming-out party, as he stopped 34 of 35 even-strength shots (and 35 of 37 overall) in the Bolts' pivotal 3-2 win over the Chicago Blackhawks at the United Center.

Add in the fact that Bishop was seemingly dealing with a lower-body injury and there's plenty of inspiration and momentum on the side of Tampa Bay. Can Chicago salvage a home split with a counterpunch Game 4 win. Here's our preview & prediction.

Toews was fantastic on faceoffs in Game 3, winning 72% of his draws. However, Tampa defensement did their job by keeping him out of the scoring column with brilliant on-puck reads and intelligent backchecking. Toews (and Patrick Kane) is the motor that makes the Blackhawks run on offense. They'll need him to find his lamp-lighting mojo again in this one.

Hedman has been an assist machine from the blue line, tallying helpers on two of Tampa's three goals. His 20 career playoff assists are a franchise record, and the Lightning are a near-unstoppable offensive team with him zinging bullet passes to the circles and in front of the net. If he gets going again, the Lightning could be headed for a closeout game back home in Game 5.

Blackhawks goalie Corey Crawford has a reputation sometimes as a serviceable goalie lacking the pure dynamic skill set of the game's elite goaltenders. However, he's shown a propensity to become nearly transcendent in clutch situations. This would be a dang good time to put on one of those performances.

We have this series going seven, so it naturally follows that we see the Blackhawks bouncing back with a Game 4 home win. Expect Toews to get on the scoreboard early and Chicago to ride the wave to a series tie.