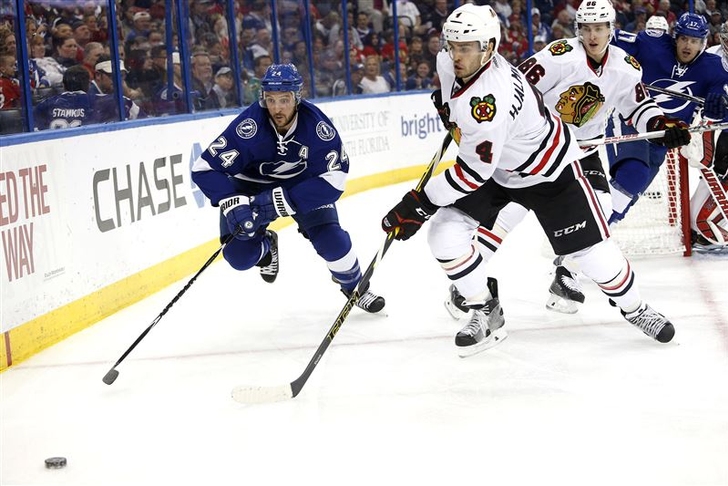 The Tampa Bay Lightning fell apart late in Game 1 of the Stanley Cup Final, giving up two Chicago Blackhawks tallies in just over two minutes that turned a 1-0 Tampa lead into a 2-1 loss.

They had no such trouble in Game 2.

Trailing 2-1 early in the second period, Tampa's offensive arsenal woke up in a big way en route to a rousing 4-3 victory on home ice in front an ear-splitting crowd clad in Lightning blue.

Chicago nullified an early Cedric Paquette goal with counterpunch answers from Andrew Shaw and Teuvo Teravainen in the second. However, Nikita Kucherov would provide a haymaker of his own just under two minutes after Teravainen's goal, before Tyler Johnson added to his blazing postseason run with his 13th goal of these playoffs.

Leading 3-2 after the fireworks of the 2nd period, the Lightning encounted a flashback to Game 1 when Brent Seabrook erased their lead with a beautiful finish under four minutes into the third.

Blue-liner Jason Garrison wasn't content letting the nervousness fester, picking up his second point of the game with a crowd-exploding tally in the mid-third.

The Blackhawks would battle would bring the heat with a late power play, but the Lightning would hold on to salvage a split of the first two games in Florida heading to the Windy City.

There's plenty of positive moments to talk about for Tampa Bay, but the really key moment was the exit of goalie Ben Bishop from the game in the third. What looked like an equipment malfunction may have been something else, as Bishop headed into the locker room with time winding down. Early reports were that he was just pulled, but it's something to keep an eye on.

RW Nikita Kucherov posted a +2 plus/minus in Game 2, including his critical game-tying score in the 2nd period which swung momentum back in the Bolts' favor.

He and defenseman Victor Hedman (and his two assists) were the true standouts of this one, carrying Tampa to a series tie.

RW Marian Hossa was a force all night long, posting a +1 plus/minus with an assist and a general propensity for making defensemen's lives hell.

The series heads to Chicago for Monday's Game 3 at the United Center. The pucks drops just after 8:00pm EST on NBC Sports Network.