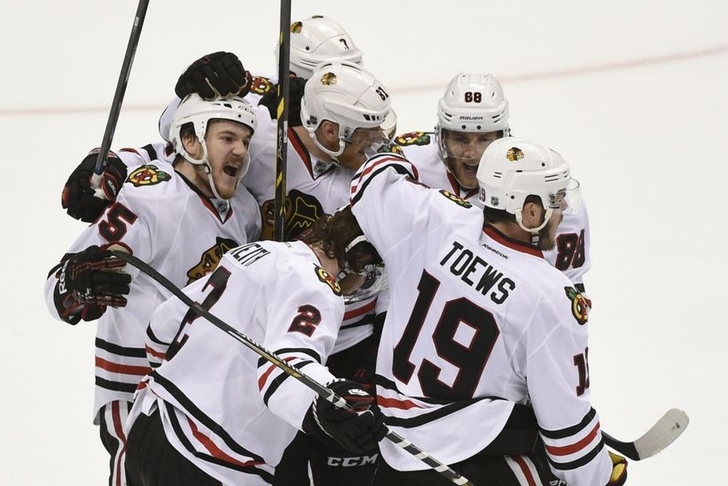 Chicago Blackhawks captain Jonathan Toews did the damage early. His teammates joined in on the fun after that, sending the Blackhawks to their third Stanley Cup Finals in six seasons with a 5-3 road win over the Anaheim Ducks in Game 7 of the Western Conference Finals.

Toews made the first period his playground, drawing more-than-noticeable cheers from the pro-Blackhawks contingent in Southern California with two fantastic tallies in the first twelve minutes.

Brandon Saad and Marian Hossa would join Toews' scoring parade in the second, with Hossa's goal being held up after it was determined via replay that the deflection off his skate into the net did not come with a distinct kicking motion.

Anaheim would get one back from Ryan Kesler before the end of the period and a Corey Perry lamp-lighter midway through the third would temporarily ignite the Ducks' hopes, cutting Chicago's lead down to 4-2.

However, a crucial Cam Fowler hooking penalty would doom the Ducks, as Brent Seabrook made them pay off Patrick Kane and Duncan Keith helpers to push the advantage back to three.

The Ducks would get one back with time winding down off a high redirect by Matt Beleskey on the power play, but it would be far from enough to bring Anaheim back.

The Blackhawks now have a date set up with the Tampa Bay Lightning, with Game 1 of the Stanley Cup Finals slated for Wednesday at 8pm EST in Tampa.

There were two and they both involved troublesome moments for Anaheim captain Ryan Getzlaf. Getzlaf fell down on Toews' second 1st period goal, allowing the Chicago captain to break free towards goalie Fredrik Anderson. In the 2nd period, it was Getzlaf's turnover which set up the rush for Brandon Saad to make it 3-0.

Getzlaf's nightmarish night would look up a bit with a pretty assist to Corey Perry to cut the Blackhawks lead to two, but that won't make him feel any better heading into the offseason.

Split the award between Toews for the obvious reasons and goalie Corey Crawford who strung together big save after big save to take the wind out of Anaheim.

Ryan Kesler gets the nod for giving the Ducks a little bit of life with his late second period goal. It's the only reason why Anaheim made things semi-interesting down the stretch.

Chicago will do battle with Tampa in search of their third Stanley Cup title in six years. The Ducks remain home and start the long offseason ahead.