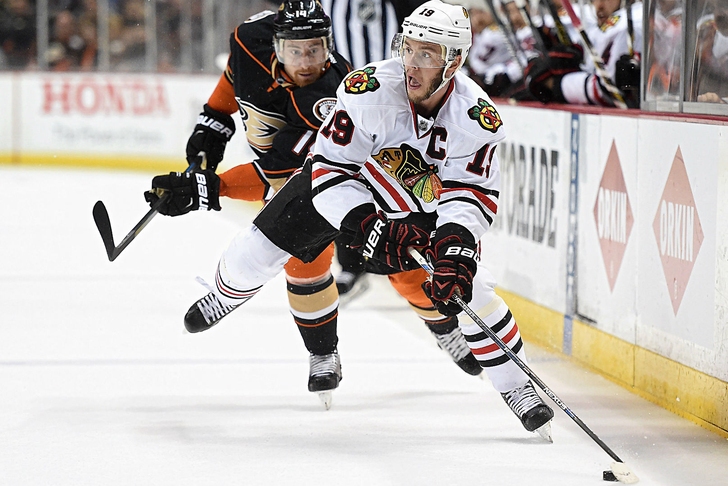 Two conference finals. Two Game 7s. The Tampa Bay Lightning are already waiting as the East's representative in the Stanley Cup Finals after a win last night, and it's up to the Chicago Blackhawks & Anaheim Ducks to decide who'll join the Bolts when the Finals start next week.

It's been a classic Western Conference Finals chock-full of nail-biters, and we have a feeling tonight's winner-take-all battle in Southern California won't be any different. Here's our Blackhawks vs. Ducks Game 7 Preview & Prediction.

Patrick Kane is the unquestioned X Factor of these playoffs, tallying 17 points in 16 games while picking up a goal in three of his last four games. He already has three series-winning goals on his career postseason resume. If the Blackhawks are to escape Anaheim alive, he's a good bet to pick up #4 on Saturday night.

Kesler was brought over from Vancouver last summer for one thing -- playing tight, suffocating defense against top opposing scoring threats. He did just that early in this series against Jonathan Toews, but Toews has broken through the past three games with four points and a host of effort plays. For the Ducks to secure a date with Tampa, Kesler's going to have to revert to being Toews' shadow like he was in Games 1 through 3.

The spotlight is bright and perhaps blinding on Anaheim goalie Frederik Andersen. Andersen was an absolute force in the first two rounds, but he's given up 13 goals (with a save percentage under .900) in a nightmarishly inconsistent Western Conference Finals. For goalies, deciding playoff games are a lot easier on the road where you can simply treat it as a business trip. Andersen will be at home, attempting to shake off the cobwebs with the emotions of thousands of Ducks fans hanging on his performance. It'll be fascinating, nerve-wracking television.

We're hesitant to bet against the #1-seeded Ducks at home, but there's just too much playoff experience and too much firepower on the Blackhawks' side to write them off. Expect Andersen to wobble a bit on an early goal or two and Chicago to capitalize like they always seem to do in these situations.