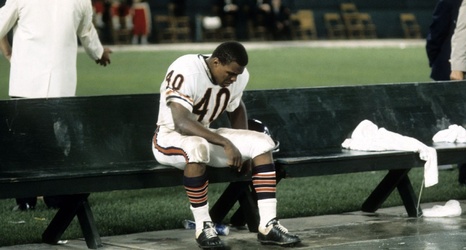 Six Hall of Famers and 230 past and present players and coaches were on hand as the Bears kicked off their 100th anniversary celebration weekend on Friday. When Sayers was wheeled onto the stage, the roar from the crowd could have drowned out the jets at nearby O'Hare International Airport.

Weakened by dementia diagnosed five years ago, Sayers still made the 130-mile trip from his home in Wakarusa, Indiana.

He showed up wearing his gold Hall of Fame jacket and a blue and white cap with the number 40.