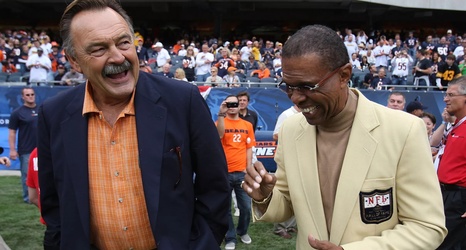 “That’s one of the reasons I came — to see how Gale was doing,” the former Bears wide receiver said Friday prior to the Bears 100 Celebration Weekend at the Donald E. Stephens Convention Center in Rosemont, celebrating the Bears’ 100th season in 2019.

Sayers’ appearance the Bears 100 convention was a bittersweet moment on a night of celebration. At 76, the player considered by many the greatest running back to ever play in the NFL is suffering from severe dementia. Sayers entered the convention center in a wheelchair, weighing 130 pounds and wearing his Hall of Fame jacket and a baseball cap with the logo “40” — his jersey number — on the front.