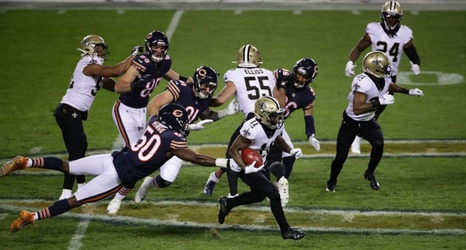 CHICAGO, ILLINOIS - NOVEMBER 01: Deonte Harris #11 of the New Orleans Saints runs the ball past Barkevious Mingo #50 of the Chicago Bears in the second half at Soldier Field on November 01, 2020 in Chicago, Illinois. (Photo by Jonathan Daniel/Getty Images)

Have teams figured out how to beat this Chicago Bears defense?

So, here’s a deep, dark secret I’ve never told anyone: for each of the last nine years, I’ve watched the Chicago Bears play football, with the same song in my head. Perhaps you’ve heard it before — a Magic Uno song entitled “Cutty Come Back,” in 2011, when Jay Cutler tore his thumb and missed the final six games of the season, and a parody of the 1977 hit, “Baby Come Back.