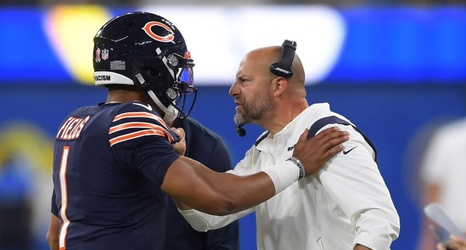 The Matt Nagy criticism has reached an all-time high. The Chicago Bears rookie quarterback, Justin Fields continues to roll with the punches with maturity and professionalism, but the rest of the football world has continued to raise their voice.

For months now, the growing suspicion around Nagy’s decision to keep Andy Dalton as his sure-fire starting quarterback is that the coach promised his veteran the job. That’s it. A simple promise.

However, even Nagy himself once admitted that much can change after making a promise such as that. Speaking with Cris Collinsworth a few months back, Nagy clarified that a lot can happen between then (mid-June) and Week 1, opening the door for a potential switch at quarterback.