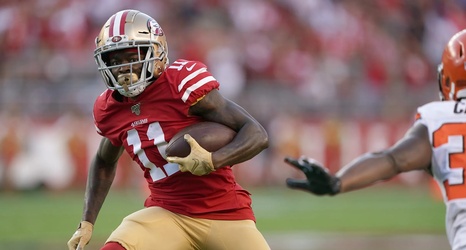 The Bears brought in their first new face at receiver this offseason Friday when they signed former 49ers standout and Olympian Marquise Goodwin to a one-year contract on Friday.

Goodwin brings a speed burst the Bears have been searching for all offseason. He ran a 4.27-second 40-yard dash at the 2013 NFL Scouting Combine, tied for the fifth-fastest mark of all time. Two years ago, he beat other NFL players to win the 40 Yards of Gold sprint exhibition.

The 30-year-old is expected to compete for a roster spot as a field-stretching wideout in a receiving room that has remained mostly unchanged since last season.