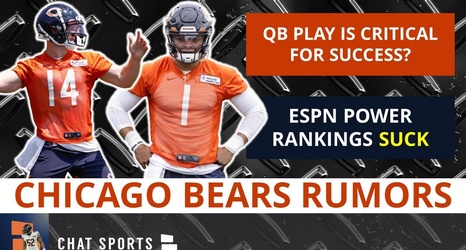 https://manscaped.com. Must use PROMO CODE: BEARS20 Justin Fields and Andy Dalton should be a step up from last season when they had Mitch Trubisky and Nick Foles as the quarterbacks on the roster. So with improved play from the quarterback position and Aaron Rodgers’ future in Green Bay murky could the Bears win the NFC North? SB Nation said the quarterbacks are the 2nd most important players for Bears success this season. SUB TODAY! We’ll be bringing you all the latest Chicago Bears news and rumors during training camp and the NFL preseason: https://www.youtube.com/BearsNow?sub_... In ESPN’s future power rankings they had the Bears ranked in the bottom half of the league coming in at #27.