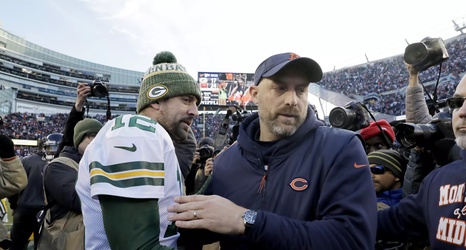 As if he needed any extra incentive, Bears coach Matt Nagy has one more reason he wants to beat the Packers this season.

Nagy and Green Bay quarterback Aaron Rodgers played in the American Century Championship, a celebrity golf tournament in Lake Tahoe, in July, and Rodgers started some trouble. Nagy recounted their interaction after practice this afternoon.

The night before the tournament began, they held an event to introduce the celebrity players. When Nagy’s name was called, he tried to make his way from the back of the room.

“I’m scrambling in the back to stand up and there’s about a hundred guys sitting in the back row, and as I’m walking, all of the sudden I trip,” Nagy said.