Report: Bears "Done" With Jay Cutler, Plan To Cut Or Trade Him This Offseason 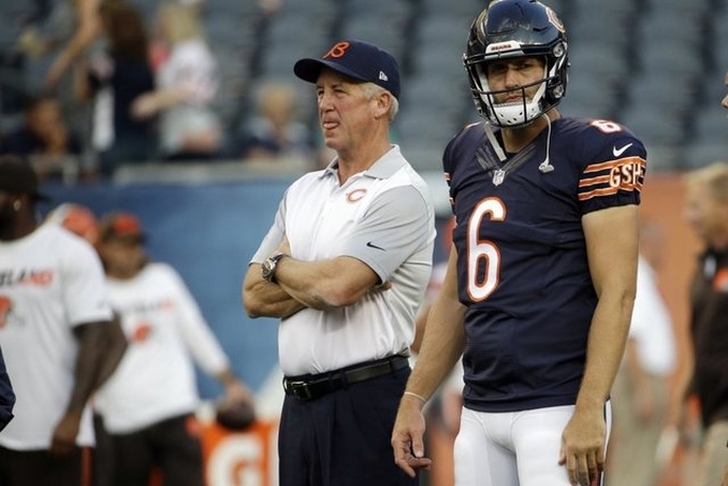 Chicago Bears quarterback Jay Cutler is the team's starting quarterback, but he will be playing elsewhere next season. According to Mike Mulligan of the Chicago Tribune, head coach John Fox is "done" with Cutler and plans to either cut or trade him after the season:

Two different league sources say Fox had told friends he was done with Cutler. The player is coming to the end of the guaranteed money on his contract and can be launched after this season with minimal salary cap impact.

The worst kept secret is football is that Cutler is only back as a starter because the Bears have nowhere else to turn. Hoyer's on injured reserve with a broken arm, Matt Barkley isn't ready for prime time and the organization has failed to draft or develop another option.

That leaves the rest of 2016 for Cutler to spend on trial before a jury of 31 other NFL teams. There is no mercy in that court. But there remains a glaring shortage of quarterbacks in professional football and some team somewhere has to be weighing the possibility of bringing in Cutler next year.

The Bears planned to have Cutler back up Brian Hoyer for the rest of the season, but Hoyer is on IR after suffering a broken arm in Thursday's loss to the Packers. Cutler suffered a sprained right thumb in Chicago's Week 2 loss to the Eagles, and will return for Monday's game against the Vikings.

He and Fox have been at odds virtually all season, especially after Fox publicly announced that Cutler wasn't going to get his job back when he returned from injury. This week, Cutler said Fox “doesn’t have a choice” about playing him now.

The Bears signed Cutler to a seven-year, $126.7 million deal following the 2013 season, but only has $3 million of dead cap money left on that deal.

Cutler, who is in his 11th season in the league and 8th with the Bears, has passed for 373 yards, one touchdown and two interceptions so far this season.