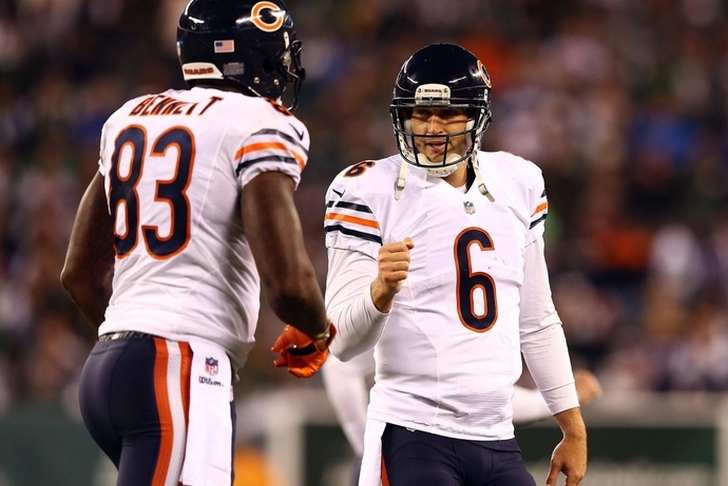 In a game that featured little scoring, the Chicago Bears mounted a fourth quarter comeback to defeat the San Diego Chargers 22-19 on Monday Night Football. The Bears snapped a two game losing streak and are now 3-5. The Chargers lost their fifth straight contest, falling to 2-7.

QB Jay Cutler led the Bears on a scoring drive that started with just over eight minutes to go in the game and ended with just over three minutes left. He found backup tight end Zach Miller for the game-winning score. Cutler completed 27 of 40 passes for 345 yards and two TDs in the game. He also fumbled once and threw a pick-six, but guided the Bears to a win.

The Bears defense stepped up on the Chargers' final drive, sacking Rivers twice and preventing them from scoring. The Chargers were unable to complete a 4th and 23, giving the Bears the win.

With RB Matt Forte out, Jeremy Langford got the start for the Bears. He picked up 72 yards and TD on 18 carries. He also added 70 yards on three catches. The Bears as a team ran for 111 yards on 26 carries.

WR Alshon Jeffery had a monster game for Chicago, catching 10 passes for 151 yards. Seven players caught at least one pass for the Bears.

QB Philip Rivers once again shouldered the load for the Chargers, completing 26 of 42 passes for 280 yards and a TD. He had a critical, second touchdown taken away with a little over eight minutes to play in the fourth quarter after lineman D.J. Fluker was flagged for being downfield. Had the Chargers scored there instead of settling for a field goal, the game would have been altered dramatically.

The Chargers running woes continued, as they picked up only 77 yards on 19 carries. San Diego also lost another wide receiver, as Malcom Floyd went down with a shoulder injury in the second quarter and didn't return. As a result RB Danny Woodhead, TE Antonio Gates and WR Stevie Johnson were each targeted at least 10 times.

The Chargers have their bye next week and then host the Kansas City Chiefs. The Bears travel to face the St. Louis Rams.