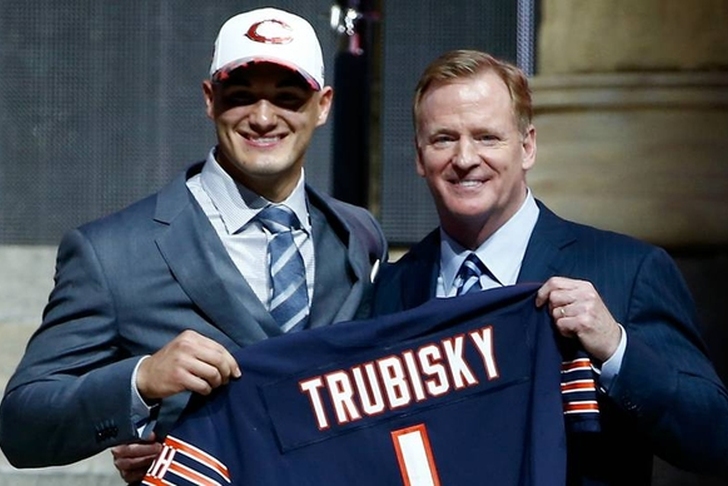 The 2017 NFL offseason is basically over, which means it's time to grade what the Chicago Bears did this year. Sure, a few more players might be traded, cut or signed, but it's likely the Bears are finished making moves. Below is the Bears' offseason grades, which feature both free agency and the NFL Draft.

As for the grading, teams don't get a "B" just for showing up. A "B" is a good offseason, while an "A" is a great offseason. A "C" is not bad in my eyes, it's simply average at best. It's tough to get a "D," since that basically means a team botched almost everything about the offseason. Obviously there is a lot of opinion here, so hit me up on Twitter if you disagree with the Bears' offseason grade.

Let's start with the positives, because there will be plenty of negatives later on. I love a few of the moves on the defensive side of the ball the Bears made. Getting Prince Amukamara was a shrewd pickup and if he can stay healthy, he could be a low-end No. 1 CB. Demps was a quality pickup and he'll be counted on at the safety spot. Getting Howard for less than a million could be a total steal. I don't even hate the Mike Glennon pickup as much as everyone else, at least when looking only at free agency. Adding Kendall Wright as the new slot WR for just $2 million was a quality addition as well.

But the Bears made plenty of head-scratching moves as well. Alshon Jeffery had his problems, but the Bears let him leave for under $10 million to the Eagles, while giving Wright $2 million and Markus Wheaton $6 million this year. It was like the Bears had allocated money for Jeffery and when he left, they threw it other WRs. Wheaton has some potential, but he barely played last year. The Bears gave him too much. And speaking of too much money, why is Dion Sims getting $18 million over three years? Yes, the Bears can get out of the deal after just one year, but he got more than Jared Cook. It doesn't make any sense to make a No. 2 TE among the Top 20 highest paid TEs in the NFL when he's never even reached 300 yards in a season.

I'm not on the Marcus Cooper train at all, given his struggles in Arizona, so giving him $16 million over three years wasn't a good move. Much like Sims, the Bears can get out quickly, but it's still an overpay. I like some of the moves the Bears made, but there were a surprising amount of head-scratchers.

I loved the Bears draft last year and thought it was one of the best. The opposite is true this season. I don't like trading up for Mitchell Trubisky at all. He was not worth the No. 2 pick at all, especially given that Mike Glennon was signed to be the starter next year. Trading up made it even worse. Why spend the No. 2 pick (in a trade up) for a player who probably won't start?

Then there's Shaheen, who has the size and upside, but is raw. It was reach and the Bears had bigger needs than taking a player who will be their No. 3 TE this year behind Sims and Zach Miller. Sure, Miller is aging and has battled injuries, but that's two straight picks who won't make an impact. I actually like the Eddie Jackson pick, but he's not going to play a ton right away either.

The Tarik Cohen pick made zero sense. I'm not high on him because he's so tiny and the Bears already go three-deep at RB. And it's four-deep if you want to count Benny Cunningham. Sure, Cohen could be a nice compliment to Jordan Howard down the road, but this is another reach for a player who probably won't see the field much. Morgan has some upside, but is still raw as well.

The Bears needed impact players and were in great position to get them. Instead they reached for players, and there's a real chance all six don't play much this year. There's only so much capital for teams to use with picks and salary cap and the Bears doubled up at all the wrong spots for no reason. I hope in five years I'm wrong, but this was a bad draft.

I was very high on Ryan Pace after last year's offseason: I loved what he did and I thought the Bears would continue that in 2017. I hope in several years I'm wrong on this, but that doesn't appear to be the case.

Every NFL team has limited capital in terms of salary cap space and draft picks. The Bears had quite a bit of both this offseason to spend. So naturally they use the two biggest pieces on quarterbacks, add two expensive tight ends and ignore other positions of need. In a bubble, the individual picks/signings of Glennon, Trubisky, Sims and Shaheen and so on are understandable.

But as a group it's confusing. It's also a giant middle finger to Glennon. Signed with the promise of getting chance to prove he's a franchise option, the Bears have clearly made him a one-year stop-gap at best. Rather than upgrade the team for 2017 in the draft, the Bears traded up to get his clear replacement and drafted three offensive players from non-FBS programs who won't contribute right away.

It could have been another strong offseason for the Bears. Instead, Pace bet his job on Trubisky and went all-in when he didn't need to. It's likely going to be a rough year for the Bears, which could mean John Fox is fired. Hopefully Pace's aggressive moves pay off in the long run, or he's next up to get canned.

Follow our Chicago Bears team page for all the latest Bears news or download the Chat Sports App!