On Sunday, The Bears And The Packers Did Something We Hadn't Seen Since 1992 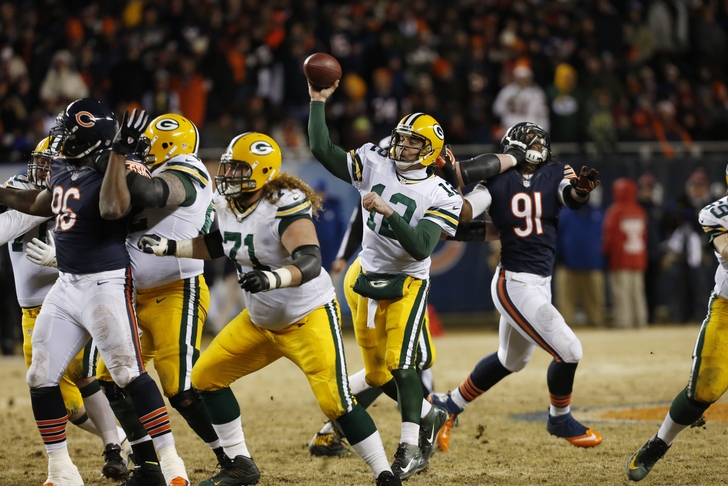 And that was the only other time it happened in NFL history.

Over the course of the Green Bay Packers' 38-17 win over the Chicago Bears, not a single punt was kicked between the two sides. Of the 15,000-plus games that have taken place in the NFL, that has only been done once before - a early-season matchup in 1992 between the San Francisco 49ers and Buffalo Bills.

The teams traded scoring drives on the first six possessions of the game before the clock ran out on a late Chicago push in the first half. The score was 21-17 without a single boot by either punter.

Green Bay would continue to light up the scoreboard in the final 30 minutes, as QB Aaron Rodgers finished with 4 TD passes (two each to WRs Jordy Nelson and Randall Cobb). All in all, they registered points on six of their seven drives on the day, with the seventh ending in a missed field goal attempt.

Chicago, oddly enough, wouldn't score in the second half - something that usually leads to a bevy of kicks for the sake of field position. However, their final four drives would end in a pair of Jay Cutler interceptions, a failed fourth down, and the clock expiring respectively. Thus, a game with 15 possessions combined ended with zeroes for both punters in the box score.

Just as in 1992's 49ers/Bills oddity (a 34-31 Buffalo win), this game was a mix of long drives, second-half turnovers, and defenses that couldn't figure out a way to get off the field.

All of that adds up to history being made by two teams that were in the top half of the NFL in total punts coming into Sunday.

Special thanks to Chris Chase of For The Win for information used in this report.

This Bizarre NFL Rule Will Have You Shaking Your Head

Ranking the Aerial Views of Every NFL Stadium