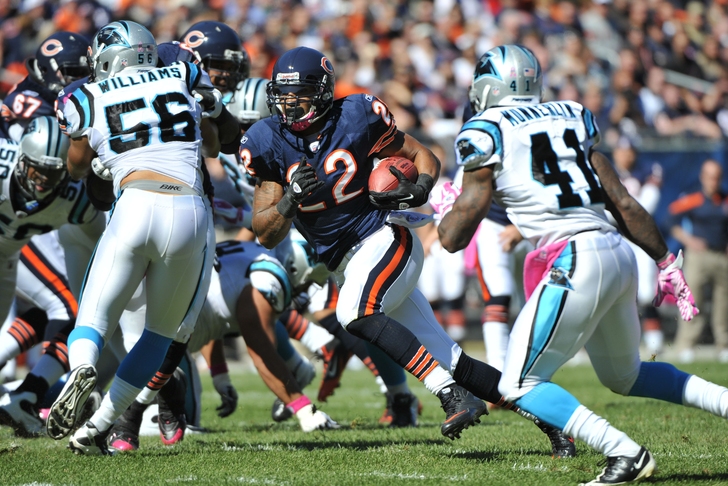 Chicago has dominated this game from the first quarter on, forcing three turnovers and capitalizing on offense. Carolina has had no answer for anything the Bears have thrown at them, but a touchdown right before halftime has given them some momentum to take into halftime.

Biggest Play: Trailing 7-0 halfway through the first quarter, the Bears' defense stripped Panthers wideout Kelvin Benjamin after a catch and recovered the ball, setting their offense up in the red zone. Chicago scored on the drive and never looked back.

Biggest Surprise: We knew Chicago's offense was explosive, but what they've been able to do against one of the league's best defenses has been impressive. The Panthers have looked helpless to stop the Bears, and are going to have to make some major halftime adjustments if they want to get back in this game.

Carolina Key Player: Rookie wideout Philly Brown has provided the only really positive play for the Panthers, returning a punt 79-yards for a touchdown in the craziest play you will ever see. He's also chipped in 22 rushing yards for Carolina's offense.

Chicago Key Player: Matt Forte has been killing the Panthers defense both on the ground and out of the backfield, running 9 times for 35 yards while catching 7 passes for 85 yards and a score.

Who Has The Edge? Chicago has owned the Panthers on both sides of the ball, and with how poorly Carolina's offense has played in the last two and a half games, they don't appear to have the firepower to get back into it. Expect the Bears to cruise the rest of the way.