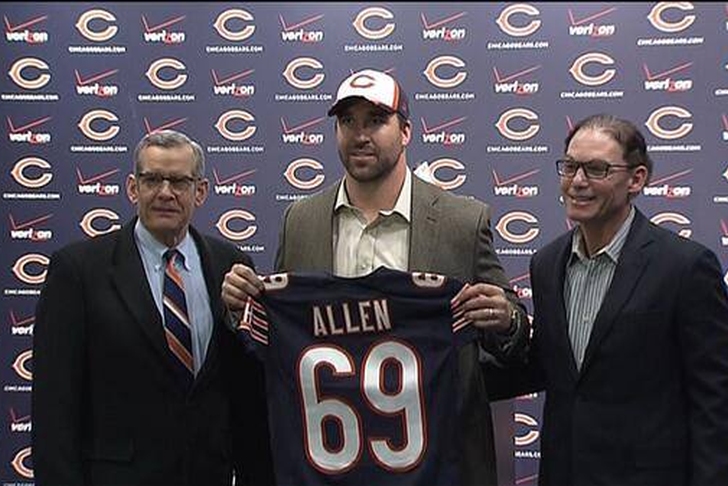 The Chicago Bears have officially welcomed defensive end Jared Allen to Chicago. The former Minnesota Viking signed a 4-year, $32 million deal last week with the Bears. The deal includes $15.5 million guaranteed and the pact voids to three years for $24 million.

Allen boosts the Bears defense which struggled to rush the passer last season. It was also one of the worst defenses in Bears history.

The signing now gives them some hope on defense after a great season offensively for the team in 2013. Allen was in Chicago today as the team officially introduced the 31-year-old. Here are some highlights from the conference:

Allen on the Bears offense

Allen took time in the presser to compliment the Bears offense, and yes that included quarterback Jay Cutler. Allen praised Cutler earlier in the week and thinks the Bears can win a championship with the quarterback.  Allen said he called Cutler right after he signed. I bet Brian Urlacher is mad.

There were reports of Allen retiring during the free agency period if he didn't get a deal done for the money he wanted. In the presser, Allen said he "Just didn't want to play for a bad team." That's where the Bears came in.

Allen on joining the Bears

Mel Tucker played a big role in recruiting me to Chicago.

I just want to win a Super Bowl.

I absolutely think this team is closer [to winning a Super Bowl] than people think. - Jared Allen on the state of the Chicago Bears.

With a really good offense and improving defense, Allen will have his chance in Chicago.