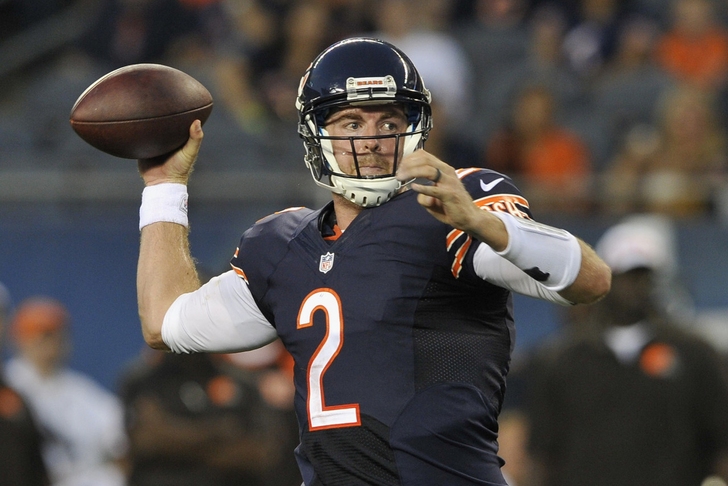 With Chicago Bears rumors fixated on today's signing of former Minnesota Vikings defensive end Jared Allen, it may be easy to overlook that the questions surrounding the Bears' backup quarterback situation may have just been answered.

Per Brad Biggs of the Chicago Tribune, the Chicago Bears may be out of the free agent market in regard to finding a #2 quarterback -- leaving 29-year old Jordan Palmer as the prohibitive favorite to land the job --

Yes, #Bears will create competition for Jordan Palmer but the No. 2 job looks like his to lose from this vantage point.

Speculation began to brew late last week that if the Dallas Cowboys decide to cut former Chicago Bears starting quarterback Kyle Orton, the eight-year veteran would find his way back to the Windy City.

However, in the wake of the Chicago Bears' signing of Jared Allen to a blockbuster four-year, $32 million deal, it looks like an increasingly safe bet that Jordan Palmer is being groomed as the safety net for starting quarterback Jay Cutler.

Jordan Palmer has been a journeyman in the first four years of his NFL career -- spending 2008 and 2010 with the Cincinnati Bengals, before landing in Jacksonville (2012) and ultimately with the Chicago Bears last season.

Palmer has not appeared in a non-preseason NFL game since 2010. He has never started a game, and has only fifteen career pass attempts (ten completions). He has zero career touchdowns against two interceptions.