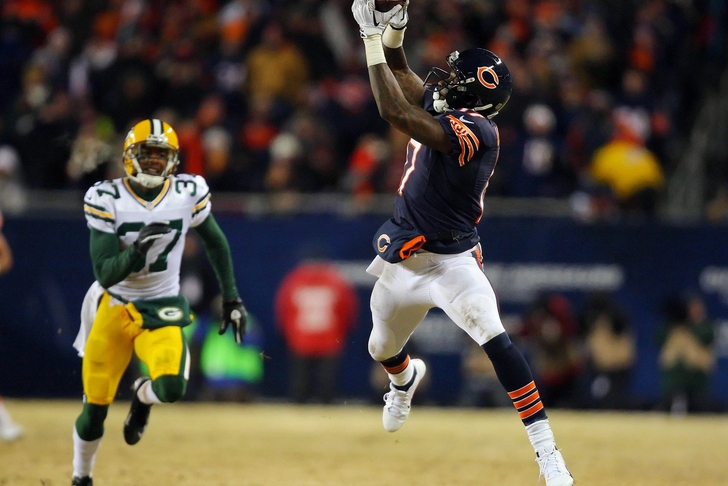 QB EJ Manuel silenced his doubters for a half at least to start the 2014 NFL season, as he went 11-for-14 for 113 yards and a touchdown to give the Bills a 17-7 lead heading into the locker room.

Two Chicago turnovers (one of those coming on a Jay Cutler interception) stunted their offensive attack in the first 30 minutes, as the Buffalo defense's opportunistic nature gave them fits.

Chicago's offense would partially atone for their out-of-sync first half coming out of the second-half gate, as a deft mix of Matt Forte rushes and Cutler timing routes were the impetus for an 11-play, 57-yard drive. Their movement would stall out at the Buffalo 23, but a 41-yard field goal by Robbie Gould would shave the Bills' lead to 17-10.

The Bills' response drive seemed promising to start, but EJ Manuel's short pass to wide receiver Marquise Goodman was picked off by Bears FS Chris Conte on a perfect jump by the talented defensive back.

With the Soldier Field crowd firmly behind him, Jay Cutler engineered an absolute beauty of a drive to tie the game. 4-for-4 for 40 yards, Cutler hooked up with star wide receiver Brandon Marshall for an 11-yard TD to tie the game at 17.

The Windy City faithful would continue to make their voices heard, as Buffalo would look shaky on their next two offensive possessions (both punts). The Bears wouldn't fare much better on their next two touches, punting once before capping off a promising seven-play, 60-yard drive from the shadow of their own goal post with a momentum-killing Cutler pick.

Buffalo DT Kyle Williams' impressive show of hands gave the Bills a huge opportunity mid-way through the fourth. EJ Manuel and crew would take advantage, as they used 3:50 of the clock before setting up Dan Carpenter for a 33-yard field goal attempt. It split the uprights, and the Bills had an upset in arm's length leading 20-17.

Chicago wouldn't buckle, however, as Jay Cutler took the field with four minutes left and the game on the line. Out of the shotgun, Cutler picked apart the Buffalo secondary en route to set up a game-tying field goal by Robbie Gould. 37 yards later and the scoreline read 20-20.

EJ Manuel would proceed to kneel on the ball to end regulation, as the Bills and Bears would head into overtime.

Chicago would win the coin toss, but would be forced to punt after just four plays and 16 yards. That would end up being their last touch of the game as the Bills' two-headed rushing duo of CJ Spiller and Fred Jackson put the Bills in position (along with a 20-yard EJ Manuel dart) for a glorified extra point of a field goal.

Dan Carpenter would nail it to finish up a huge 23-20 upset for Buffalo.