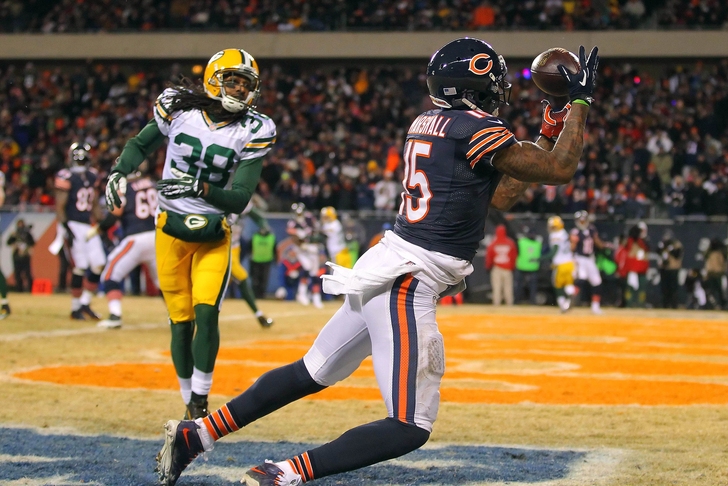 The Chicago Bears open the 2014 NFL season with sky-high expectations, looking past a possible NFC North title towards a Super Bowl berth.

The Buffalo Bills come in extremely stocked at their skill positions but facing major questions about quarterback EJ Manuel's ability to lead the team to the next level.

After an extremely quick three-and-out by the Bills to start the contest, Bears QB Jay Cutler went 3-for-3 on a masterful four-play, 66 yards drive to lead Chicago to a lightning-fast score in front of the Soldier Field faithful (finished off with a 12-yard TD pass to TE Martellus Bennett).

Buffalo and the oft-maligned Manuel put together a perfect counter-punch drive on the following possession keyed by Manuel's legs and a 32-yard reception by WR Robert Woods that push the Bills into the red zone. Five plays later, EJ Manuel would scramble into the end zone for a two-yard score to tie the game at seven.

The next two possessions would result in moderately-successful six play drives for both teams before each team was forced to kick it away in a proverbial chess match.

Chicago's offense would start to click along nicely on their next drive with a nice mix of Matt Forte runs (three carries for 29 yards) and Jay Cutler short passes. However, after an 18-yard strike from Cutler to WR Brandon Marshall, Marshall would cough up the ball.

A 27-yard fumble return by the Bills would push the ball into Bears territory at the 46. Buffalo would cash in with a 50-yard Dan Carpenter field goal just six plays later to capitalize on the Marshall turnover.

Down 10-7, the Bears would see things go from bad to worse in the next three minutes. A deep ball from Cutler to TE Martellus Bennett was expertly read by Buffalo CB Corey Graham.

A momentum-cementing pick (plus a 43-yard return and a penalty) set up the Bills at the Bears 7, where Manuel would find RB CJ Spiller for a quick touchdown to put Buffalo up 17-7.

Chicago's offense attempted to get rolling on a crucial drive into the two-minute warning, but could not take advantage of a 24-yard defensive pass interference call as they were forced to kick it away once again.

Buffalo would be unable to capitalize on a jaw-dropping 47-yard run by RB Fred Jackson, as they would kick it back to the Bears with just seconds left. The Bears would clock it out, as they would head into the break in need of a refresh, down 17-7.