Bears NFL Draft Rumors: Everything You Need To Know Heading Into Draft Week 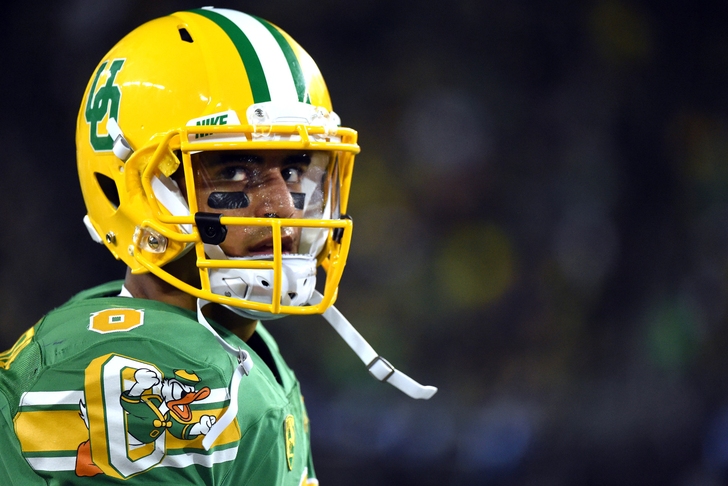 The 2015 NFL Draft is just a few days away, and there’s plenty of reason to be excited about the festivities in Chicago if you’re a Chicago Bears fan. Here’s our breakdown of everything Bears fans need to know heading into draft week.

Is A Draft Trade With The Eagles On Or Off The Table?

The Chicago Bears are one of the most intriguing teams heading into the 2015 NFL Draft, with many options including a trade on the team’s plate with under three weeks to go until the festivities kick off.

One potential scenario could be a swap with the Philadelphia Eagles at #20 that would land Chicago a gaggle of draft picks while allowing Eagles coach Chip Kelly to select his former charge, Oregon QB Marcus Mariota.

However, if Marcus Mariota somehow slips to Chicago at #7, they could very well take him for themselves and groom him behind Jay Cutler as the team’s franchise quarterback of the future. Chicago met with Mariota in early April and GM Ryan Pace likes what he sees out of the 2014 Heisman Trophy winner, so it’s possible Kelly and the Eagles would have to trade ahead of Chicago in order to secure Mariota.

Chicago To Skip Drafting Running Back After Jacquizz Rodgers Signing?

Chicago added a true change-of-pace running back to their depth chart with the signing of former Atlanta Falcons running back Jacquizz Rodgers, but that doesn’t mean that they won’t look to the 2015 NFL Draft to find a future heir apparent to Matt Forte.

Per Brad Biggs of the Chicago Tribune:

The Bears signed Rodgers to a one-year deal because he clearly has some traits they like. He’s a solid receiver out of the backfield and he’s also decent in pass protection even though he’s only 5-foot-6, 196 pounds. GM Ryan Pace and player personnel director Josh Lucas have seen plenty of him the last four seasons when the Saints played the Falcons. But my hunch is Rodgers is the latest veteran to come in on a minimum salary benefit contract. With a minimal investment, the presence of Rodgers (or Ka’Deem Carey, a fourth-round pick from last year, for that matter) isn’t going to preclude the Bears from drafting a running back. Rodgers isn’t a long-term solution in terms of eventually replacing Matt Forte, not in my opinion anyway. So, I don’t think the signing of Rodgers affects draft plans one way or the other.