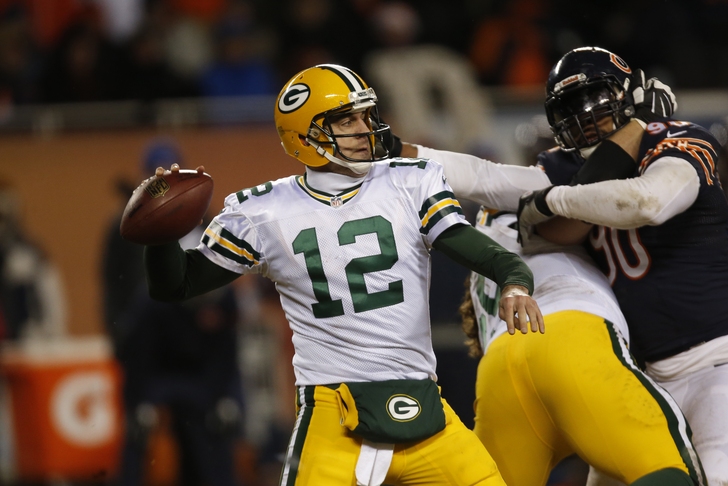 In an epic first half at Soldier Field, the Green Bay Packers and Chicago Bears traded scores on the game's first six possessions. Aaron Rodgers' second TD pass of the half would prove the early difference, as Green Bay led Chicago 21-17 at the half.

Green Bay's offense would stay smoking hot in the second half while Chicago's would go dormant at the wrong time, as the Packers would pull away for a 38-17 win in the Windy City.

Here's 5 things we learned from this clash between age-old rivals:

5. The Bears Secondary Looks Banged Up...

And it is. Both FS Chris Conte (shoulder sprain) and S Ryan Mundy (stinger) played on Sunday. However, the entire Chicago Bears secondary still remains banged up, understaffed, and versus the Packers, a step slow against Aaron Rodgers and his arsenal of aerial weapons. That was enough for Rodgers to lay 4 TDs on the Bears through the air - a scoring outburst the Bears couldn't match, especially in the second half.

Any time a high-powered offenese (such as the Packers have) hits an inconsistent patch, rumblings will surface around the quarterback position. Is Aaron Rodgers on the decline? Is it time for a down year for the former Super Bowl and league MVP?

If Sunday is any indication, the answer to both of those questions is a resounding no. Rodgers went 22-of-28 for 302 yards and 4 TDs, deftly picking apart the Bears D at every turn. A performance like this could be just what he needs to jump-start the entire team heading into October.

3. Interceptions Doomed Cutler And The Bears:

After taking a hit that seemed to shake him up at the end of the first half, Bears QB Jay Cutler wasn't the same man in the final 30 minutes. After Green Bay extended their halftime lead to 24-17 with a field goal, Cutler (22-of-34, 256 yards, 2 TD, 2 INT) would throw interceptions in Packers territory on two straight drives. Both would prove extremely costly, as Green Bay would pick up touchdowns off of both turnovers to turn a close game into a rout.

2. Randall Cobb and Jordy Nelson Are One Of The NFL's Best Receiving Duos

Both Cobb (7 catches, 113 yards, 2 TDs) and Nelson (10 catches, 108 yards, 2 TDs) eclipsed the 100-yard mark and functioned as Green Bay's entire passing offense for a good part of the day. However, the two of them are better than a solid chunk of full receiving corps around the league. When both are clicking on all cylinders, opposing secondaries don't stand a chance.

1. Welcome To The Wild And Wacky NFC North

Green Bay, Detroit, Minnesota, and Chicago have all exposed their flaws early on in the 2014 season. Today was Chicago's turn to show what can happen when their secondary falls apart and turnovers plague the offense. However, all four teams have issues to address in the season's final three quarters. Whoever can patch things up for the longest period of time will likely walk away with the division crown.