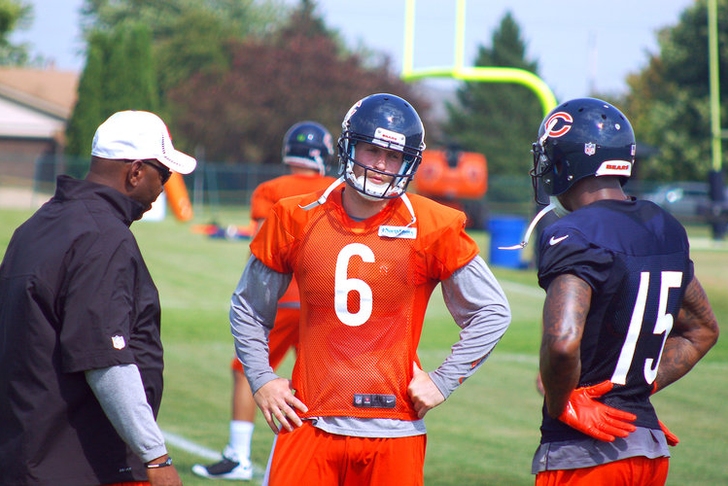 NFL Training Camp is slowly approaching, as is HBO’s annual Hard Knocks series. When HBO picks the right team to follow, the show is extremely entertaining...but the last few years have been total busts. In my opinion we haven’t seen a solid Hard Knocks since they covered the Jets in 2010.

The Bears are one of eight teams left in the running this year, and here are five reasons why they'd be a perfect fit for Hard Knocks this season:

1. The Bears made a splash in free agency, signing Jared Allen

Along with re-signing core players like Jay Cutler, Charles Tillman, Brandon Marshall, and D.J. Williams, the Bears also added help from the free agency pool. The Bears were able to reel in Lamarr Houston, Ryan Mundy, Willie Young, and Jared Allen to bolster the defense.

Jared Allen reminds me of the kid down the street that nobody would ever invite over to play sports. Sure enough, you’d see Jared stroll into your back yard, and everyone would give each other the, “great, Jared’s here” look. It’s not because nobody liked Jared, though - it’s because he always ended up hurting someone no matter what the game was.

I can assure you that Jay Cutler and Bears fans are pumped to see Allen wearing the navy and orange this season. I can also assure you this guy makes for good TV...check it out:

2. Alshon Jeffery is turning into an elite NFL receiver

Last season, the league was introduced to the new aerial weapon in Chicago: Alshon Jeffery. In just his second year, Jeffery made 89 catches for 1,421 YDS and seven TDs. He was also a frequent guest on Sportcenter’s Top 10 for his impossible grabs.

I’m not kidding when I say impossible, either. He actually defied physics and human limitations last season. Get used to the Alshon Jeffery show, because I’m not sure anyone has any idea how to stop him. He's a beast, and an absolute nightmare for opponents to cover - Hard Knocks would be a great opportunity to see what makes this rising star tick.

3. Jay Cutler being Jay Cutler. Also, he has a new wife and baby

I’m assuming that Jay Cutler is the kind of player that every fan hates unless he’s on your team. He’s cocky, animated, and generally seems ticked off at all times. His attitude is probably how the whole “smokin’ Jay Cutler” phenomenon began.

Hard Knocks would be a great chance for Cutty to show the rest of the nation why Chicago loves him. Yes, he’s a little rough around the edges, but he’s a competitor and a whole lot of fun to watch when he gets rolling. Plus, he’s got a brand new baby and a wife, Kristen Cavallari, whom I wouldn’t mind seeing once in awhile.

4. The Bears have an intriguing preseason schedule

Even though the preseason counts for nothing, there are certain opponents that make watching a little more bearable. The Bears will square off against the offensive machine that is the Philadelphia Eagles, Blake Bortles and the Jacksonville Jaguars, the defending champion Seattle Seahawks, and they finish up against Johnny Manziel and the Cleveland Browns.

If you’re telling me that you don’t want to watch an HBO production of Johnny Manziel in his last start before the regular season, you should seek help. All four of these matchups will add interest and value to an episode.

5. The starting safety job is a wide open competition

It doesn't matter what team you're loyal to - position battles are always a fascinating part of Hard Knocks. I can even remember getting completely invested in the Jets' fullback competition back in 2010. If you start to lose interest, remember - you can always laugh at reliably terrible Bears’ safety Chris Conte.

Conte became famous in Chicago last year for whiffing on tackles, giving up big plays and blowing coverage against the Packers to send them to the playoffs. Oddly enough, he still has a chance to return as a starter this fall. With so much uncertainty around the safety position, it’ll be fun to see who's able to step up and win a starting role.

What choosing a Hard Knocks team comes down to is finding a squad people want to see - potential and intriguing players go a long way. Recently, Hard Knocks has bored their audience to tears with teams like the Miami Dolphins (who didn't let HBO get any of their locker room shenanigans on camera) and the naptime-inducing Cincinnati Bengals.

The Bears have the star talent that those teams were lacking, and pretty much every NFL fan would be interested in watching the training camp of a Super Bowl contender. Only time will tell if HBO can work out an agreement with the Bears, but if they choose to go another route, don’t be surprised if Hard Knocks loses even more of its luster.