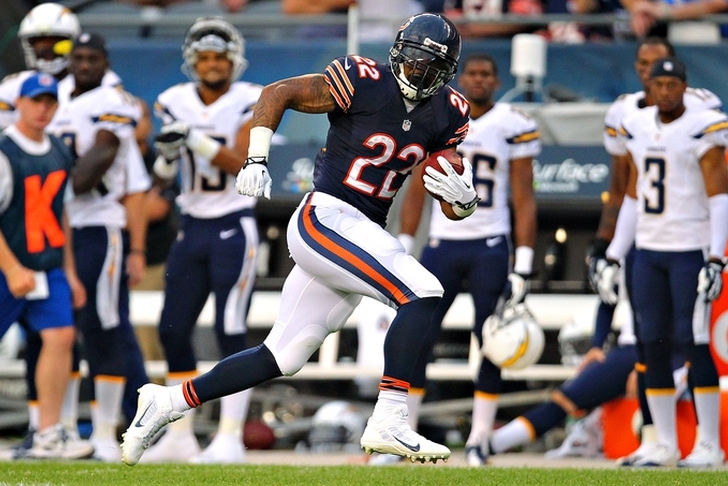 The Chicago Bears are 1-3, and even with the return of Jay Cutler from injury, appear to be in rebuilding mode. The Bears have already traded DE Jared Allen to the Panthers and LB Jon Bostic to the Patriots. Those two moves likely won't be the last the Bears make either. Matt Forte is already rumored to be on the block. The Bears need more young talent and draft picks. That means barring a godfather offer for WR Alshon Jeffery, he's not going anywhere. Cross off Jay Cutler and his bloated contract too. With that in mind, here are three more trades the Chicago Bears could make.

WR Alshon Jeffery To The Patriots

Remember that Godfather offer? The Patriots might be willing to offer the Bears enough to get Chicago to pull the trigger. That means at least a first round pick and likely another first and other draft picks (or players). That's a lot and also why it's unlikely to occur. Teams like the Carolina Panthers and Baltimore Ravens all need a wide out badly and could try to make a move too. Remember, I don't think the Bears will end up dealing Jeffery, even if he isn't quite 100 percent right now.

RB Matt Forte To The Cowboys

The Bears reportedly want at least a second or third rounder for Forte. No team will give up a second rounder for a 29-year old back on the last year of his deal, and a third round pick is highly unlikely too. But if Dallas and Jerry Jones dangle a fourth rounder, the Bears could say yes. For the Cowboys, the loss of Lance Dunbar means the team is without it's best pass catcher out of the backfield. Forte would be the workhorse back as both a runner and pass catcher the team needs without Tony Romo and Dez Bryant. If Jones starts to see the season slipping away from his team, don't be surprised if he tries something bold. Plus, the Cowboys reached out to the Bears about Forte in the offseason.

DE Willie Young To The Dolphins

Young has played DE most of his career and is out of place as a 3-4 OLB. He's already requested a trade and might have that wish granted. Young doesn't have the greatest contract in the world, but he can still contribute as a backup DE and had 10 sacks a season ago. A team like the Dolphins that needs help getting to the QB could deal a late round pick (6th or 7th round) for Young with the hope he can contribute a few sacks. If the Bears can get a late rounder for Young, they'd likely make a deal.