When legends collide! Brazil icon Ronaldinho leads star-studded XI of ex-pros - including Kaka and Iker Casillas - to victory over John Terry and Luis Figo under the Burj Khalifa in Dubai 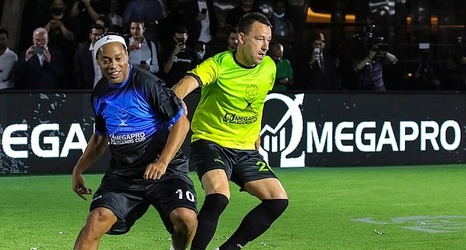 The Legends Cup truly lived up to its billing on Thursday as Brazil icon Ronaldinho and his star-studded XI got the better of Luis Figo and Co in a thrilling match under the Burj Khalifa.

The match was the first of its kind in front of the world's tallest building and it needed some serious star power given its location in downtown Dubai.

And the lucky punters who got to the see action live and in person were treated to an absolute thriller, with Ronaldinho's team coming out on top 18-16 against Figo's team.

Chelsea legend John Terry also laced up his boots again for the friendly encounter but ended up on the losing side.