'We are a bit WORRIED': Thomas Tuchel tells the USA not to 'overuse' Christian Pulisic during crucial World Cup qualifiers as he admits Chelsea star is still struggling with pain from ankle injury 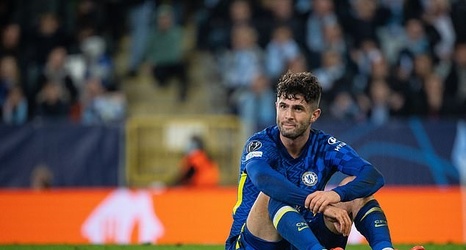 Thomas Tuchel has warned the United States national team to be 'responsible' with Christian Pulisic's fitness as the Chelsea winger 'still feels some pain' after returning from injury hell.

The 23-year-old made his return to the Blues matchday squad last week after an ankle injury took two months to heal, with Pulisic making his first Premier League appearance since the opening day in Saturday's 1-1 draw at home to Burnley.

The US national team captain is now set to fly off for his country's vital World Cup qualifiers against Mexico and Jamaica next week, but Tuchel, who gave Pulisic substitute cameos against Malmo and Burnley, hopes the winger is not overused.