Timo Werner scored in all three of Germany's World Cup qualifiers but added ANOTHER shocking miss to his catalogue... he remains a conundrum and must show consistency to win back a starting spot for Chelsea 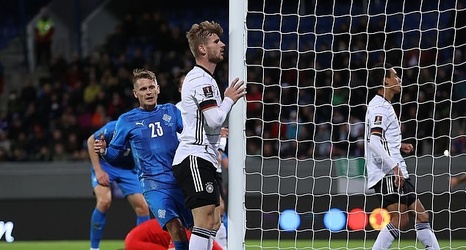 Few strikers, particularly top level players, have delivered the number of shocking misses that Timo Werner has mustered in the last 18 months.

And the Chelsea forward sent the Twitter mob into a frenzy once again on Wednesday night with another howler.

It remains bizarre just how frequently Werner will fluff a clear opportunity in front of goal for club and country compared to the prolific assassin at RB Leipzig who left for £47m, which seemed like a drop in the ocean for his talent at the time.