Roma striker Tammy Abraham breaks Serie A record for most goals scored by an Englishman in a single season... as the former Chelsea star continues to reinvent himself in Italy 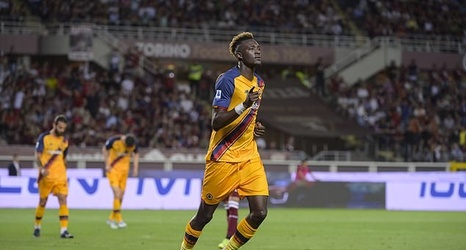 Roma striker Tammy Abraham has broken the Serie A record for most goals scored by an Englishman in a single season after scoring against Torino on Friday.

The former Chelsea striker has been a revelation in Italy, scoring 17 league goals under the watchful gaze of Jose Mourinho - which has launched the club into a European qualification spot.

The 24-year-old was deemed surplus to requirements at Stamford Bridge last year before joining Roma on a five-year-deal - a decision which may come back to bite the Blues.

Abraham bagged two goals against Torino on Friday night which helped seal a spot in Europe for next season ahead of their Europa Conference League final.