Real Madrid deal Chelsea another transfer blow by beating them to 18-year-old goalkeeper Gabriel Slonina, with Chicago Fire kid's agent revealing it is his 'dream' to join Spanish giants 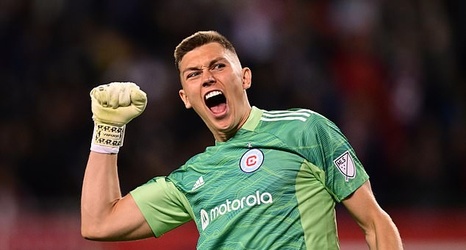 Real Madrid look to have dealt Chelsea yet another transfer blow after they appear to have beaten the Blues to the signing of goalkeeper Gabriel Slonina.

Goalkeeper Slonina, 18, currently plays for MLS side Chicago Fire, but has drawn interest from a number of English clubs after impressing in the MLS so far this season.

But the young goalkeeper's agent has reiterated his intentions to sign for Real, who have already had one bid rejected, but are expected to table a second, more financially appealing bid.

Slonina's agent Jaime Garcia said: 'It should be an honour for Chicago, and the MLS, to have Real Madrid take notice in one of their players.